A Boyka-less “Undisputed” movie sounds like a 007 movie without James Bond, but as hard as it may be to believe, there is indeed an example of the former. Wesley Snipes and Ving Rhames headline this serviceable but wanting prison flick that’s good for a few decent boxing fights, let’s take a closer look, so without further ado, round one, ding ding.

Wesley Snipes steps into the lead of Monroe Hutchen, who reigns supreme as the Undisputed boxing champ of the American penal system, until he’s challenged by former World Heavyweight champ George “Iceman” Chambers, played by Ving Rhames. Peter Falk portrays jailed mafioso Mendy Ripstein, who plays off the feud between the two leads to his advantage, while Jon Seda and Wes Studi portray fellow inmates, Chuy and Mingo. Michael Rooker rounds out the cast as prison warden A.J. Mercker, who helps facilitate boxing matches between inmates.

George “Iceman” Chambers was once on top of the world, with the title of World Heavyweight Boxing Champion to his name, and a string of contenders who couldn’t touch him. All of that changes when he’s sent to prison on a rape conviction, but this does little to put a dent in his massive ego. Chambers sets about establishing himself as the new alpha male in Sweetwater prison, but soon discovers a threat to his supremacy in the form of fellow inmate Monroe Hutchen, the reigning champion of Sweetwater’s inter-prison boxing program. With some persuasion from incarcerated mob boss Mendy Ripstein, Sweetwater’s warden, A.J. Mercker, agrees to set up a match between Monroe and Chambers. 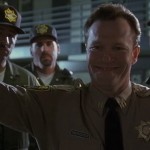 Warden Mercker loves to toy with his prisoners

The undisputed champion of Sweetwater penitentiary enters the ring

The Iceman unconcerned about his prison sentence

As important as it may be to attempt to avoid comparisons with what came after “Undisputed”, the plain fact is that (the involvement of stars like Wesley Snipes and Ving Rhames notwithstanding) we might not even be talking about this film if it weren’t for its sequels.

There’s nothing outright bad about the film, but sadly, not a huge amount to write home about either. Wesley doesn’t have much to work within the character of Monroe; there are points where he comes across as something of a Zen master, but we never get inside his head like we do Boyka’s, leaving the viewer with little more than a generic good guy prisoner.

Chambers isn’t given great scope or depth of character development either, unlike the transformation he undergoes in “Undisputed 2”, and he just comes across as an ill-tempered, arrogant nut, but at least Ving Rhames is clearly having a great time playing him.

Their conflict, pity to say, just isn’t on the same level as Boyka’s quest to prove himself the ‘Most Complete Fighter in the World’, and pretty much boils down to Chambers wants to fight Monroe because he just really enjoys punching people and Monroe accepting the challenge because, well he’s in prison, and he’s got nothing else to do.

The Iceman is ready for the next fight

Monroe shows the fruits of his labor in solitary confinement

Monroe shadowboxes for the fight ahead

Monroe on the ropes

There’s actually little boxing action to be found in the film, and it’s passable without being spectacular. As a seasoned martial artist, Wesley does a pretty solid job overall while being restricted entirely to punching. He pretty much walks all over his much larger opponent in the opening fight, and gets the film off to a decent enough start. It’s pretty much training sequences and flashbacks to Chambers’ and Monroe’s pro-fights outside of prison for the middle section, and to the film’s credit, the buildup to their match is genuinely decent.

The finale also takes place under “London Prize” rules, i.e. a continuous fight with each knockdown marking the end of a round and granting the downed fighter 60 seconds to continue. However, like so much of the rest of the film, the final fight is just okay, belying the talents of its two leading men.

When all is said and done, the “Undisputed” franchise will probably go down in history as the “Street Fighter” of martial arts’ movie series – an unremarkable and largely overlooked initial entry that is often ignored by fans, only for the follow-up to blow all expectations out of the water. In that regard, the best compliment one can pay to “Undisputed” is that it led to two vastly superior sequels and a highly anticipated fourth installment, as well; considering just how uneventfully it came and went during its initial release, that’s gotta count for something.

Monroe imparts his wisdom on the art of boxing

Monroe gives The Iceman his all

Monroe defends his title once again

Going in for the open shot

Chambers is eager for his next opponent