When her father Fang Hun is brutally murdered along with the order of Chang San Feng, little Chi embarks on a quest for vengeance against his killer, Lung, head of the evil snake cult. Along the way she is helped by a mystic who appears to her as a ghostly white crane. Whilst Chi heals and grows in strength, the snake cult are busy harnessing an incredible power to unite five elements and rain destruction on the world.

Fang on Chi flight of fancy

Shaw Brothers meets Quentin Tarantino in this story sporting snappy dialogue, and grounded in kung-fu history. All are vividly brought to life with colourful metaphors, characters and settings straight from a 70’s wuxia film. Writer Zanna Vaughan-Davies has included all the hallmarks of classic kung-fu cinema, all present and accounted for from trash talking about whose style is better to epic hand-to-hand battles.

The artwork by Santiago Espina is intricately detailed, and vibrant (Fan Hung’s perfect abs are to die for) yet tinted with some pages drawn with charcoaled edges as if having aged over time. This gives the comic the look and feel of an ancient book, along with a 3D element which draws you into the story’s setting. In capturing the comic-fu action, Espina has drawn easy-to-follow storyboards of step-by-step moves which are swift and powerful.

The Snake King reveals himself

Like all good wuxia stories embedded in Zen philosophy, “White Crane” has a series of meaningful elements brought together in a unifying and entertaining book.

Book One of this epic saga does more than tantalise; it hurls you straight into the action and emotion of this Shaw Brothers-esque revenge tale. The colour scheme tinted, making it look like an ancient text adds an extra dimension of fun. Writer and artist Davies and Espina both go all out to whisk you away on an adventure to another time and place. Basing the story on a real life kung fu legend sufficiently grounds this fantastic tale in the real word, much like “47 Ronin”, and no doubt kung fu historians will revel in looking for those historic inclusions.

As a little extra, Vaughan-Davies outlines his search for new artists when the original artists became unavailable. The alternative visions other artists had in mind is certainly fascinating, especially for those interested in the artwork.  Overall, book one of “The Legacy of Fang Chi” is an entertainingly blood-thirsty wuxia story and comic book lovers’ delight with the best of both worlds rolled into one along with some stunning artwork and equally graphic action.

A walk in the village 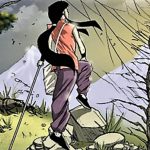 What are your impressions on women such as Fang Qīniáng in the martial arts and which kung-fu or combat comics would you like to see narrated, perhaps into a film? Let us know in the comments below, feel free to join in the conversation on Facebook and follow us on Twitter. (Don’t forget to check out our other literature reviews for an intellectual kick!)