Home » News » Once Upon a Time in China Trilogy — Blu-ray Box Set Competition 2!

Once Upon a Time in China Trilogy — Blu-ray Box Set Competition 2!

LUCKY UK FANS: DON’T MISS YOUR SECOND CHANCE TO WIN JET LI‘S CAREER-DEFINING ONCE UPON A TIME IN CHINA TRILOGY OF MOVIES ON BLU-RAY!

Presented on Blu-ray from 4K restorations and featuring brand-new artwork, ORDER YOURS via Eureka Entertainment and Amazon, and check out our 10/10 review!

Starring Jet Li as the real life Cantonese folk hero, Wong Fei-hung, a physical embodiment of traditional Chinese values and moral incorruptibility, the Once Upon a Time in China series is a martial arts epic that charts China’s transition into the modern-world as it gradually abandons its old traditions and begins to accept the inevitable encroach of Western cultures.

Once Upon a Time in China – In 19th century Canton, Wong Fei-hung battles ruthless imperialist forces determined to subjugate his country and enslave his people, leading to a climactic fight sequence still regarded as one of the best ever filmed.

Wongs efforts lead to a confrontation with the deadly Commander Lan

Once Upon a Time in China II – Wong Fei-hung faces off against the White Lotus Cult, a dangerous xenophobic group seeking to drive all European influence out of China, as well as a corrupt military officer, played by Donnie Yen in his breakthrough role.

Once Upon a Time in China III – Wong Fei-hung travels to Peking and is forced to enter a martial-arts contest in order to prevent an assassination attempt against a prominent Chinese diplomat who wants to showcase traditional Chinese martial-arts, and restore national pride.

With action sequences choreographed by the legendary Yuen Woo-ping, the Once Upon a Time in China series is a glorious high-point in martial-arts filmmaking, and Eureka Classics is proud to present Tsui Hark’s original trilogy, as well as ONCE UPON A TIME IN CHINA AND AMERICA (which saw Jet Li return to the Wong Fei-hung role after a four-year gap).

Jacky Cheung as Buck Tooth So

Wong Fei Hung and 13th Aunt must save the children

The action choreography is superb

This release is a must-have edition for all martial arts movie fans! If you missed it first time around, you definitely don’t want to miss this re-issue!

OUATIC is the movie that revitalised the kung fu film craze

In the ONCE UPON A TIME IN CHINA films, JET LI plays which famous martial-arts Master? Is it: 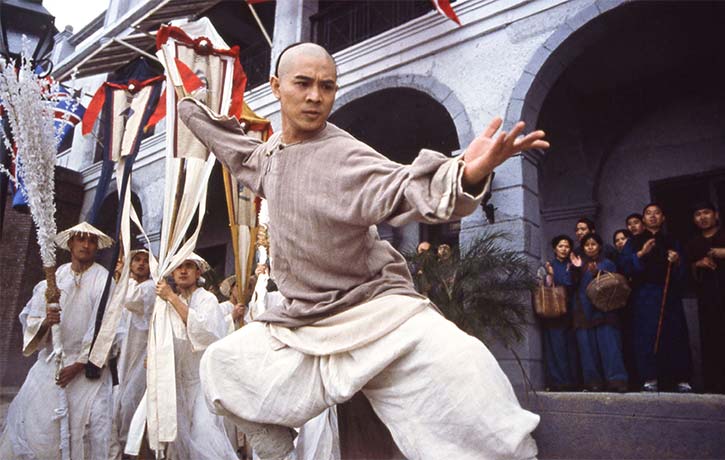 Yuen Biao gets carried away as Leung Foon

Winners will be notified via Facebook message by 23:59GMT/BST Wednesday 6th January 2021.

Do you think Jet Li played the best Wong Fei-hung so far; what was your most memorable action or fight scene from the Once Upon a Time in China trilogy?

Buy “Once Upon a Time in China Trilogy — Blu-ray Box Set Competition 2!” on eye-popping Blu-ray, now!

STAY FU-lly LOADED THIS XMAS in the FUniverse with these Top 10’s, Top 5’s, exclusive interviews, create  your own EPIC “Once Upon a Time…” story  in KFK Official gear and subscribe for more enthralling legends of kung-fu on YouTube!