Although billed as a sequel, the film is completely unrelated to “No Retreat, No Surrender”. Returning to the fold are director Corey Yuen, and See-Yuen Ng this time as executive producer. Keith Strandberg also returns, sharing writing duties with producer Roy Horan and Maria Cellino.

With Jean-Claude Van Damme and Kurt McKinney having left the project, Loren Avedon was brought in as American college student Scott Wylde, and German athlete Matthias Hues as Soviet General Yuri. This marked the first feature length debut for both actors and launched their subsequent acting careers. Max Thayer is Scott’s friend Mac Jarvis, an embittered Vietnam War veteran and arms dealer, who despite his cynicism risks everything to help Scott rescue his fiancé.

College student Scott Wylde (Avedon) visits Thailand to see his fiancé Sulin (Patra Wanthivanond) when she is kidnapped and her family slaughtered by her father’s political rivals. Now a suspect in both crimes, Scott seeks the help of his friend Mac Jarvis (Thayer). On learning that Sulin is being held in Cambodia by a Vietnamese unit under the command of a ruthless Russian General (Hues) Scott and Mac, with the help of helicopter pilot Terry plan a daring and deadly rescue. 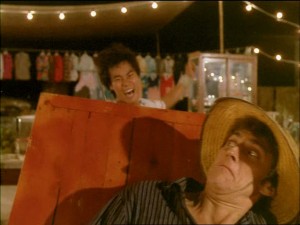 Thank heavens for that table

Scott has a surprise up his sleeve

Powerhouse Yuri gears up for a fight

No Retreat No Surrender again

Nice flush kick in the head

If the first film borrowed from “The Karate Kid” and “Rocky IV” to appeal to a young audience, “Raging Thunder” is for older viewers invoking aspects of the “Rambo” films and “Missing in Action”. Director Corey Yuen and fight choreographer “Hollywood” Lam put together some exhilarating and imaginative action sequences which include motorcycle jumps, shoot outs, and some innovative, cracking martial art displays.

The inclusion of Cynthia Rothrock and Hwang Jang Lee, Hong Kong action cinema royalty, garners excited anticipation. It is a pity that their appearances are brief, particularly Lee who has just one fight scene. They do however light up their scenes with sheer presence and their trademark standout kicking displays come the Lee vs Rothrock showdown.

Matthias Hues convinces both as an actor and action star, revelling in his role as the villain and hamming it up with great aplomb. His powerhouse physique gives make his fighting skills seem superhuman. Hues does not get to display the Van Damme level of agility and flexibility with Lam opting to choreograph a more militaristic fighting style in keeping with Hues’ character. This works well in the highly charged finale pitting Avedon’s acrobat-esque style against the heavy set Hues.

This is however Loren Avedon’s film. A talented proponent of Taekwondo, his athleticism is matched by the intensity which he conveys with every punch and dazzling spin kick. Avedon is surprisingly fast and precise, whether he is fending off kidnappers in his hotel room, or dispensing an onslaught of rogue monks. Avedon’s agility is especially evident in the slow motion shot of his spin kick connecting with Hues’ face in the final fight, cementing his impressive leading debut.

“Raging Thunder” excels where it matters most, exciting action and fight scenes, carried with a basic but solid story and some likeable characters. The absence of Van Damme and McKinney has not hampered the film in any respect with the new cast carrying the project with ease. Avedon and Hues impress in their first feature making you almost forget about the previous stars, and Rothrock and Lee show just why they are revered as action stars.

Lee and Rothrock battle it out

Hollywood Lam and Yuri square off

Dressing for the part

Dont mess with this Wylde one

David and Goliath aka Scott and Yuri