“Like Water” is a documentary-style film directed by Pablo Croce which focuses on MMA fighter: Anderson “The Spider” Silva. Silva, who at the time was the longest reigning UFC middleweight champion in history and widely regarded as the number one mixed martial artist in the world.

The other protagonist (or antagonist you might say) is Chael Sonnen, a former collegiate wrestler and a man renowned for his trash talking capabilities. Together, the two formed one of the most hotly anticipated and intriguing rivalries in the history of the UFC.

Anderson is the central figure with the added support of many of his team, including his manager Ed Soares, the Nogueira brothers (Rodrigo and Rogerio), Lyoto Machida, Ramon Lemos and his wife and kids.

Chael of course is another prominent figure in the film, as is UFC president Dana White who at times criticises Anderson for his unwillingness to perform media obligations and disappointment over a lacklustre performance in his previous fight against Demain Maia (clips of this fight are shown throughout the film). Steven Seagal even makes an appearance, showing up in the latter stages of the film to support Anderson during the fight with Chael.

The film follows Anderson as he prepares for his record breaking 7th title defence against Chael Sonnen. We are taken through the life of Silva and introduced to the gruelling training methods he undertakes in preparation for the fight, along with his ability to handle the pressures of fame as well as months spent away from his family. 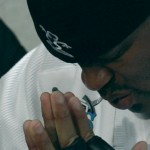 Praying before the fight

Much of the film takes place within Anderson’s gym (Black House) and follows him as he travels around attending interviews, press conferences and supporting his fellow fighters and team mates as they prepare for their respective fights.

We are treated to highlights of some of Anderson’s best wins early on in the film where many of his Capoeira, Muay-Thai and Jiu-Jitsu skills are showcased. Included in these clips are: his debut against Chris Leben, the title win against Rich Franklin, his Matrix-esque performance against Forrest Griffin and many more.

Although the fight between Silva and Sonnen is only showcased in highlights, there is still plenty of action on show as I explain in the round by round breakdown below.

Walking into the arena

Getting all Gid up

The first round begins with a small exchange between the two, with Sonnen eventually staggering Silva with a straight left hand. Sonnen then proceeds to take the advantage, ending up with Silva on his back after a strong takedown from Chael.

Anderson comes out aggressive in this round, hitting Chael with a strong leg kick. His striking is quality nullified though by another takedown from Chael, with the remainder of the round showing Sonnen landing a barrage of ground and pound strikes on his opponent.

This round follows the same pattern as the first two, with Chael dominating Silva in the grappling department and continuously battering Silva from the top position.

This is where Silva finally manages to display a decent amount of offense, hitting Chael with a sharp elbow that finally gets him backing up. Things start to look as if they are turning around for Silva as he presses Sonnen back, hitting him with a barrage of strikes. He even manages to stuff a takedown, before inevitably ending up on his back again with Sonnen regaining control.

The final round sees Sonnen almost immediately drop Silva with a left hand and jumping on him to take control on the floor again. Sonnen looks to set up an arm triangle choke on Silva, which is quickly shrugged off by the more experienced Jiu-Jitsu practitioner. From here, we see Silva on his back with Chael in his full guard and wrist control of his right hand. It is clearly evident that Silva is looking to set up either an armbar or a triangle choke. He goes for the latter, and quickly wraps Chael’s head and arm up with his legs and applies enough pressure causing Sonnen to tap. Silva wins by triangle choke at 3:10 of round 5.

Remember, these are only brief highlights so if you like what you’ve heard, I’d urge you to see the full fight. It’s a fast-paced, fun fight with one of the best comebacks you are likely to see!

This is also the fight that solidified Silva as one of the best, as he proved he was able to overcome adversity against a strong wrestler – there was always that long standing question of how he would handle such a situation if it ever arose.

Overall, it’s a solid film. Showing a humbler and caring side to the middleweight king that many may not have seen before. It also gives some interesting insight into what it takes to be a mixed martial artist, particularly at the highest level -not just through fighting itself but with the added surrounding pressures of media and isolation from family and friends.

Anderson Silva will likely go down as one of the greatest to ever grace the octagon and this film does a good job of providing us with a look into the mindset and day to day life of “The Spider”.

Tension between the rounds

The Sherlock Holmes School of Self-Defence