If you’re in the mood to see one derrière after another getting kicked in glorious slow-motion, “High Kick Girl!” is right up your alley. Frankly, a more fitting title for the film might have been “Instant Replay”, as it goes out of its way like few martial arts films ever have to make extra sure you see the damage inflicted by every punch, kick, chop, elbow, and knee in stunning, albeit somewhat overdone, detail.

Rina Takeda steps into the titular lead of Kei Tsuchiya, who implements a naively misguided strategy of impressing her Sensei Yoshiaki Matsumura, played by Tatsuya Naka, in order to be promoted to black belt. Masahiro Sudo assumes the role of Ryusoku, leader of a gang known as “The Destroyers” with a vendetta against Matsumura, while Ryuki Takahashi of “Kamen Rider” fame plays Kei’s fellow karateka, Ryousuke Nakama. Kyoji Amano assumes the role of The Destroyers’ heaviest-hitter, Kenga, and Yuka Kobayashi and Sayaka Akimoto portray Rin and Rika, a pair of female fighters for The Destroyers who give Kei a run for her money.

Kei preps for the street fight

Kei shares her offer to join The Destroyers

Kei Tsuchiya is an ambitious Shotokan brown belt, but her zeal for martial arts is matched only by her impatience to get promoted to black belt. So eager is Kei to rise to the next level that she begins picking fights with black belts at other dojos throughout Tokyo -naively thinking that taking down enough black belts will demonstrate her skill level and worthiness for promotion- thus earning her a reputation throughout the city as “The Black Belt Hunter”. Her Sensei, Yoshiaki Matsumura, tries to set her on the right path, but his emphasis on kata training does nothing to sate the rambunctious Kei’s ambitions. Kei thinks she’s about to get a taste of the karate action she craves when she’s recruited into a gang called “The Destroyers”, only to find out that the gang is actually using her to get to her sensei, with whom The Destroyers’ leader, Ryusoku, has a bitter vendetta.

The Destroyers attack with an assortment of weapons

To say that the cast of “High Kick Girl!” put their bodies through the ringer would be an understatement. There’s not a single fight sequence in the film with at least half a dozen moments where someone isn’t seriously absorbing a fist, foot, elbow, knife-hand chop, or headbutt. Whether via slow-motion close-ups to show flesh rippling from the impact of a hit or the film’s extensive use of instant replays (and wow, does it play this card a lot) the film makes dead certain to sell you on the reality of the punishment of every hit at every opportunity. While the film is relatively bloodless, it also drives home the wince-factor with its amazingly realistic sound effects of blows landing, each one a blunt thud that’s visceral, almost sickening to listen to in its dull solidity.

Kei is none too fond of this side of training

While one has to assume that the actors are theoretically pulling a lot of their strikes, it’s seemingly a matter of micrometers. One of Kei’s early brawls largely involves her and her opponent simply pounding one another with one roundhouse kick after another to see who can endure the most punishment. Later on, Kei sidekicks another enemy in the head causing his head to rebound off the wall behind him, with the reality of the hit sold by that ever reliable instant replay. Unfortunately, that proves to be to the film’s greatest detriment as well. By midway, the film has made clear its intent to do the rewind gimmick on virtually every hit, and it’s a card that the film frankly overplays, even if only to make it unquestionably clear just how much pain is being dished out.

While Kei’s clear determination to be promoted to black belt is admirable, the film goes in the reverse direction of “The Karate Kid” by pretty clearly portraying her as a bully. As amazing as she is when she springs into action, you can’t help but feel sorry for the poor black belts she pummels in other karate dojos early on in the film, and it’s obvious that she needs some serious redirection, which is where Sensei Matsumura comes in.

Tatsuya Naka is out of this world in the role of Matsumura, something that’s that much more impressive with the simplicity of the techniques he relies upon. While Kei’s fighting style doesn’t send her airborne for the most part, the amount of spinning kicks she dishes out looks like something out a Tony Jaa movie compared to the more grounded and straightforward approach her Sensei utilizes, which is exactly the point he wishes to instil to her mind. When Matsumura comes to Kei’s rescue after she’s kidnapped by The Destroyers, she sees his emphasis on kata training play out in front of her in real time, with Matsumura felling one enemy after another with knees, elbows, side kicks, and his personal calling card, a simple reverse punch. He takes a few good licks himself from a female Muay Thai fighter, but gets around that threat without being too flashy about it. Rarely will you ever see action this basic rise to such a level of outright astonishment, but Tatsuya Naka is a true pioneer of wowing lovers of action with such a degree of combat minimalism.

“High Kick Girl!” is in the business of kicking high, hard, and often, and business is good. While the film absolutely over-utilizes its instant replay gimmick, it simply cannot be denied how much the cast is willing to take it on the chin, again and again. On top of that, Rina Takeda amazes in one battle after another while Tatsuya Naka keeps it simple and still leaves the viewer feeling the same level of amazement as if he’d done nothing but backflips for ninety minutes a la Yuen Biao. “High Kick Girl!” will leave you dying for another pairing of Naka’s modern-day Samurai and Takeda’s action star in the making – something you thankfully get in 2011’s “Karate Girl”, and spoiler warning – that one is pretty sweet, too!

Kei catches her enemy off guard

The Destroyers are ready to live up to their name

Sensei Matsumuras at one with his zen nature 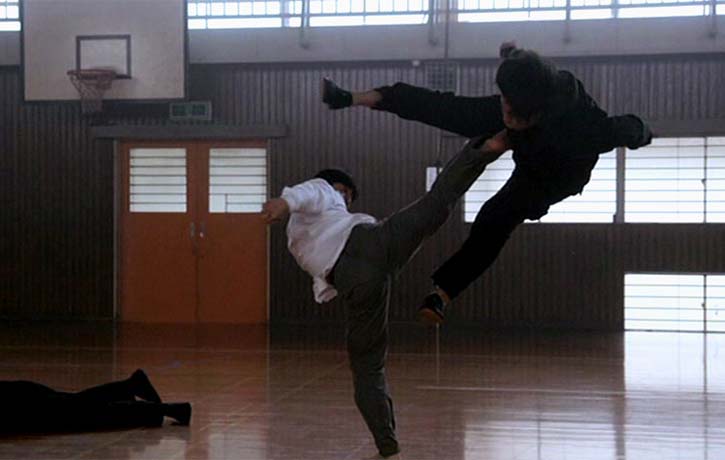 Sensei Matsumura stops an aerial attack dead in its tracks

Sensei Matsumura puts his enemy down