Adapted by screenwriter Shinobu Hashimoto from Yasuhiko Takiguchi’s novel, “Harakiri” is an anti-samurai film of revenge that demoralises authority and demolishes the romanticism associated with the strict bushido code.

“Harakiri” is set in 17th – century Japan, a time of peacefulness which has resulted in many feudal warriors becoming masterless and having to commit harakiri (ritual suicide) at clan estates. Those that do not honour this code face poverty and hunger since the law prohibits them from serving another lord without the consent of their previous master.

Here lays the destiny of Hanshiro Tsugumo (Nakadai) whose request to commit harakiri at the Iyi estate is met with much distrust since another ronin by the name of Motome Chijiiwa (Ishihama) had arrived on the premises several weeks before requesting that he take his own life. Realising that the two swords Motome was carrying were replicas made from bamboo, the clan determined he was trying to deceive them into giving him pity and money and therefore demanded he perform the ritual with his small bamboo sword or be slain as a coward. His death by sword was a slow and painful one and quite literally gut-wrenching.

Hanshiro assures the clan that his request to commit harakiri is genuine and that he is not a fraud and, being destitute, wishes to die an honourable death. He then proceeds to tell the senior counsellor, Kageyu Saito (Mikuni), and the other members of the Iyi clan about the circumstances that brought him to their estate.

Real swords were used throughout the entire picture because director Masaki Kobayashi (“Samurai Rebellion”) wanted the actors to move like the bona fide samurai of the olden days. When striking, the heaviness of the genuine swords forced the actors to move from the hip rather than from the hands as was the case with so many other samurai pictures made back then. This need for authenticity results in some very convincing swordplay, especially during the films climax where the fighting is often intentionally clumsy and not exaggerated or over stylised. But it’s the confrontation between Hanshiro and the skilled swordsman Omodaka, that becomes the glorifying moment of the film. Sudden ferocious clashing of blades incorporated with meditative stillness makes this a masterclass in swordsmanship.

Even though the film dispels many of the myths of the samurai, it is so beautifully made that the viewer’s appreciation for films about these fierce Japanese warriors will surely thrive after watching it.

Everything about this film is impressive: The Shakespearian-like narrative; the music score; the visuals, which include a sufficient amount of wide-angle shots that marvellously exemplify the set pieces; and the performances. Without a doubt, “Harakiri” is Kobayashi’s supreme achievement as a director and is quite simply one of the greatest Japanese films of all-time. 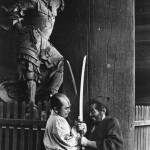 A thrashing of swords

A request for an honourable death

Spencer Lloyd Peet is a writer, interviewer and photographer who specialises in Arts and Culture.