After almost a decade of waiting, producer Alan Mehrez turned talk of a “Bloodsport” sequel into reality with a new cast, crew, and a different story. Jeff Schecter’s first feature-length script is mostly as a remake but also part sequel to the first film thus enabling it to serve as both a decent enough sequel and a stand-alone feature in its own right.

Donald Gibb returns as Ray Jackson, now the handler for the US Kumite competitors providing the link to the first film.

The Kumite is an equal opportunites competiton

Sun shows off his iron hand

Sacks dont hit back after that kick 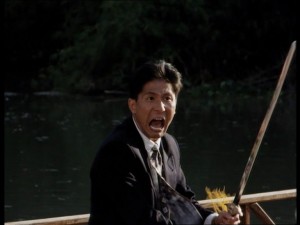 Philip Tan not happy with his small part

Antiquities thief Alex Cardo (Bernhardt) is double crossed by his partner John (Philip Tan) and left to rot in a Thai prison for the theft of a priceless sword from millionaire philanthropist Leung (Pat Morita). Alex befriends Sun (James Hong) a martial arts master serving a life sentence who teaches him his Iron Hand Kung Fu style. Realising that the sword he stole was to be the prize at the next Kumite, Alex vows to redeem himself by recovering the sword upon his release and honour Sun by entering the Kumite, the sadistic prison Demon (Han) is also invited.

Bernhardt displays impressive skill and speed using a blend of Taekwondo and Karate. His legs extend to almost near perfect straightness and he is quick with his hands. At times he resembles Van Damme, however Bernhardt is more agile and his height adds graceful lines to his skilful display, allowing him to shine distinctively. Opposite him as the film’s bad guy, Ong Soo Han finally lands his bigger role snarling and taunting with each display of his fast yet powerful martial arts skills, looking as formidable as Bolo Yeung. Bernhardt is amiably supported by a pool of talented martial arts performers including Ron Hall, Jeff Wolfe, Nick Hill, and Lisa MCullough as the first female Kumite entrant.

One Hulk of a Demon

Not looking good for Sergio

Leung and Alex reflect on the Kumite final

Choreographer Philip Tan and director Alan Mehrez have put together some very exciting displays of martial arts fights in this film packing in various disciplines that include Capoeira, Tang Soo Do, Muay Thai, various Kung Fu styles, and Brazilian Jiu Jitsu. Each fighter that’s been cast here serve as talented ambassadors for their respective art, donning an eclectic wardrobe from the traditional Karate Gi to colourfully striped spandex, and even KISS (the band) style make up!

Tan clearly understands the intricacies of each style, staging fights to accentuate each one such as Ron Hall’s incredibly fast and acrobatic Wushu, and Nick Hill’s agile and powerful Okinawa-Te Karate. Compared to the original “Bloodsport”, “Bloodsport II” boasts almost double the number of fight scenes for the Kumite alone which welcomely takes up half the film.

“Bloodsport II” is an enjoyable film which moves along at a steady pace anchored on a passable story, an impressive feature debut by Daniel Bernhardt, packed with exciting action that will likely have martial arts film junkies approving while punching the air with that sense of a hard fought victory.

Demon has the upper hand on Alex

Cordo kicks away his troubles

Cliff is not impressed with the Spandex

Alex impressess at the Kumite

Alex and Cliff square off

The best of Donnie Yen!