After two mind-bogglingly awesome, action-packed portrayals of Tommy Lee in the first two “Best of the Best” films, Phillip Rhee steps into the director’s chair for the first time in 1995’s “Best of the Best 3: No Turning Back”. In his third go as the high-kicking action hero, Mr. Rhee is sharp as ever while using his directorial debut to draw attention to the lingering issue of American hate groups. However, while it’s a genuinely solid action-fest that its leading man confidently carries to the finish line, “Best of the Best 3” can’t quite overcome one particular albatross around its neck – one that, ironically, comes not from any failing of its own, but from one of the key strengths of its own immediate predecessor.

In the town of Liberty in the American Deep South, the doctrine of racial segregation remains a hot button issue, in part thanks to local separatist, pastor Brian.

However, his doctrine of exclusion threatens to set the town ablaze with the rise of the far more radical white supremacist Donnie Hansen, leader of a local Neo-Nazi group that is gradually gaining followers, including impressionable teenagers like Owen Tucker, much to the objection of his mother, Georgia.

Tommy has a heart to heart wih young Luther

Former American martial arts champion Tommy Lee stops into Liberty to visit his sister Karen right after Hansen’s cold-blooded murder of the town’s peace-loving black pastor, Reverend Phelps. This leaves his young son Luther in the care of Karen and her husband, Jack, the local sheriff frustrated by the lack of hard evidence connecting Hansen to the murder. As Hansen’s reign of terror spreads throughout Liberty, Tommy stands his ground to defend his family, and is soon forced to battle Hansen and his followers as they continue to wage all-out war on Liberty.

The most surprising element of “Best of the Best 3” is how stand alone it feels from its two predecessors (and from the subsequent “Best of the Best 4: Without Warning”). Despite seeing Phillip Rhee reprise his role of Tommy Lee, the film feels distinctly its own entity and largely untethered to anything before or after it in the series. That isn’t a criticism, but it’s undeniable that “Best of the Best 3” displays a much more noticeable level of apathy towards every other instalment of the series than the average part three of an ongoing franchise would. If the four “Best of the Best” films were kids in high school, “Best of the Best 3” would be that loner who never ran with a clique, and that’s likely a by-product of its leading man also making his directorial debut with the film.

As a first time director, Phillip Rhee is pretty clearly striving to make the film stand on its own as much as possible, and makes a concerted effort to draw as little attention as possible to the previous two films in the series beyond them simply sharing the same protagonist. That approach also makes the adversarial shift feel like less of a sharp turn and more organic to the series, and indeed, the “Best of the Best” films have seen Tommy Lee face quite a diverse range of villains; from simple opponents in a martial arts tournament to warriors in a modern day gladiatorial arena to a white supremacist group. Pitting Tommy against such an eclectic array of villains is one of the series’ greatest attributes, but it also leads to the greatest challenge the franchise has ever had to face that -no pun intended- kicks in with this very film.

Tommys all bladed up for battle

Tommy and Margo ponder their problem

Throughout all four films in the franchise, Phillip Rhee is never anything less than incredible to see in action, and “Best of the Best 3” is no exception. The problem that the film runs into, however, is that he’s already faced an array of equally formidable opponents in the first two films, culminating in a showdown in The Coliseum with the Herculean mountain of muscle that was Brakus in “Best of the Best 2”. In essence, that film proved to be almost too good in giving Tommy Lee the ultimate enemy to overcome. After seeing Tommy take down a domineering bicep of a man, who could possibly believe that a bunch of out-of-shape yahoos could pose any serious kind of threat to him?

Fortunately, Phillip himself clearly recognizes this conundrum, and gets around it in two ways. First and foremost, he makes the thematic and philosophical elements of racism the central conflict of the film. Unlike the other films in the series, Tommy and his allies are battling for the soul of their town, and he himself makes it a point to extend the opportunity for Hansen and his followers to abandon their bigotry, with a specific focus on Owen Tucker. Tommy sees Owen as a kid who’s fallen in with a bad crowd who isn’t beyond saving, and when multiple opportunities to kill Owen present themselves, Tommy spares his life each time.

The other way Phillip gets around the issue presented by “Best of the Best 2” is by having Tommy consistently pitted against multiple adversaries in all but one of the film’s fight sequences. His first big skirmish, defending his loved ones outside of a convenience store from Hansen’s henchmen, feels like a warrior returning to battle after many years in how much the film holds off on its first big set piece. Phillip further blows the viewer away with a ninja-like flair while battling off Margo’s would-be attackers in a ski-mask later in the film, and he even adds a little dark humor to the action by taking on Hansen’s followers in a clown suit at a carnival. 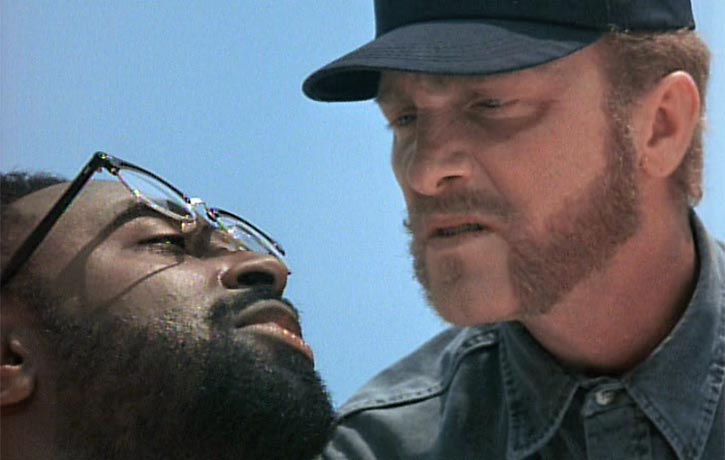 Donnie Hansen has nothing but contempt for Reverend Phelps pacifism

Reverend Phelps is close to his son Luther

The final one-on-one with Tommy and Hansen is where the film meets its villain challenge head-on, with Tommy largely booting his enemy’s butt with a dazzling array of spinning kicks. Then, the final confrontation transitions into a knife fight between the two men with Hansen’s followers cheering their leader on. Still, as solid a final brawl as it is, it can’t quite fully skirt the lingering issue inadvertently placed on its shoulders by its predecessor, but this is also where the film’s thematic approach takes the reins for a suitably satisfying pay off.

As arguably the most ambitious film in the series, “Best of the Best 3” is a solid action-drama and an equally strong debut for its first time director, one that largely stands alone from the rest of the series without feeling superfluous. As ‘jarring’ as the point about the predecessor’s sheer greatness (of the powerful villain) may be, it also bases its central conflict in the soul of its characters while still making good on the viewers craving to see Phillip Rhee kick ass. When the biggest problem in your movie comes as a result – not from any weakness on its own part but from the strengths of the last one, your franchise is clearly on pretty solid footing!

Tommy reunites with his family in Liberty

Seen “Best of the Best 3”, what do you most remember about it 23 years on; what are some of your best moments from the franchise? Let us know in the comments below; Like, share and join in the conversation with us on Facebook and follow us on Twitter & Instagram. (Bitten by the bug to BE YOUR BEST? Then be sure to check out KFK’s FU-pendous interview exclusives and movie reviews!)