Classic 1980’s action in glorious high-definition from 88 Films, starring the original “American Ninja” himself, Michael Dudikoff, OUT NOW from 88 Films and Amazon!

Actor and martial artist Michael Dudikoff stars as “Matt Hunter”, a retired black ops agent. Dudikoff started out in supporting roles, including playing Joanie’s boyfriend in the popular sitcom “Happy Days”, and as one of Tom Hank’s friends in the bawdy comedy “Bachelor Party”.

In 1985, the legendary Cannon Films were looking to produce an action movie starring Chuck Norris called “American Ninja”. Norris turned the role down leading Cannon to go on a worldwide search to find someone who would play Private Joe Armstrong, the American ninja. Over 400 candidates auditioned for the part. Dudikoff was picked out by producer and owner of Cannon, Menahem Golan, and the film’s director Sam Firstenberg. Golan even went as far as to say that Dudikoff would be the next James Dean.

It was Dudikoff’s first collaboration with actor Steve James, who was hired to play the partner of the American ninja, a role he maintained for the first three instalments. The film proved to be hugely profitable and established the start of the American Ninja film franchise. Dudikoff become a regular action star for the Cannon Group alongside Chuck Norris, Charles Bronson, Sho Kosugi, and later on, Jean-Claude Van Damme. For the rest of the 1980’s, Dudikoff would continue to star in Cannon Group action film projects, including “Avenging Force”. 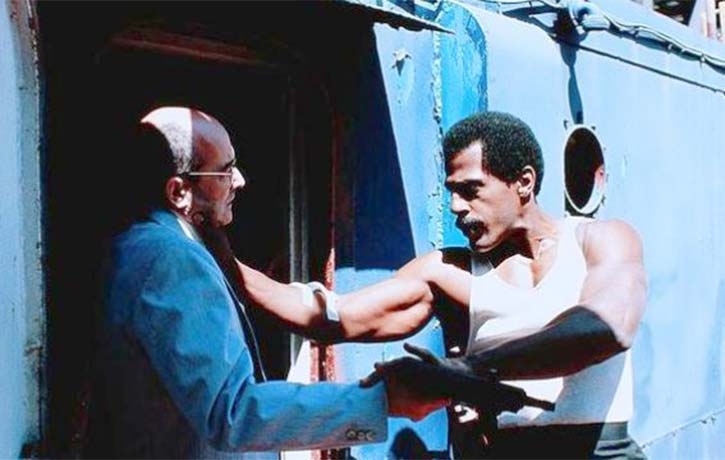 Masked terror in the woods

His “American Ninja” co-star, Steve James, here stars as “Larry Richards”, a former army comrade standing for election as a U.S. Senator. An actor, stunt performer and martial artist, James starred mostly in action films such as the “American Ninja” series, “The Delta Force”, “The Exterminator”, “Enter the Game of Death” and “To Live and Die in LA”. James also portrayed Kung Fu Joe in the 1988 comedy film “I’m Gonna Git You Sucka”. Shortly before his untimely death from cancer in December 1993, he completed filming the 1994 feature film “Bloodfist V: Human Target” with Don “The Dragon” Wilson.

Matt Hunter is an ex-secret service agent trying to protect his best friend from a group of sadistic right-wing terrorists known as Pentangle. When the ruthless organisation attacks those closest to him and kidnaps his little sister, Hunter is forced into Pentangle’s barbaric manhunt, played out in the remote swamplands of Louisiana. It is the ultimate game of cat-and-mouse, as Hunter employs his awesome array of martial arts skills in a desperate fight for survival and revenge. 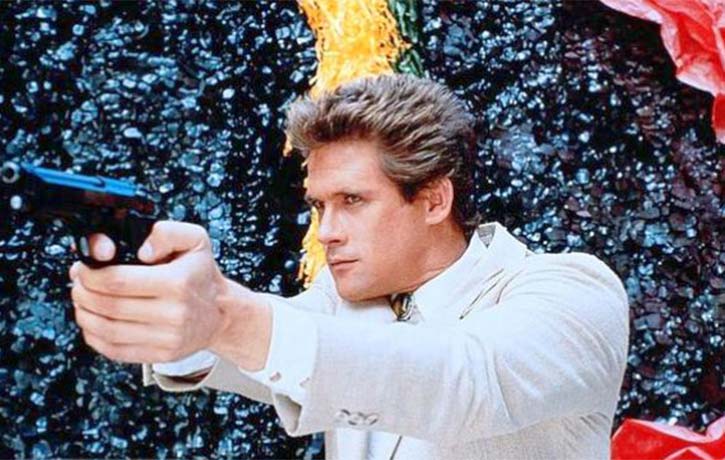 There is an option to watch this film with an introduction from it’s director, Sam Firstenberg. He considers this his best action film. That’s some statement considering other works in his filmography include 1980’s action staples such as “Revenge of the Ninja”, “Ninja III: The Domination”, “American Ninja”, “American Ninja 2: The Confrontation”, “Delta Force 3: The Killing Game”, “American Samurai”, “Cyborg Cop”, and “Breakin’ 2: Electric Boogaloo”. (Okay, maybe not the last one, but surely it wins a prize for Best Eighties Movie Title?).

Perhaps providing the inspiration for John Woo’s “Hard Target”, the opening scenes reveal two bloodied and battered victims being hunted down in some dense swampland. Those doing the hunting wear sinister masks and carry weapons that range from a katana to a piano-wire garrotte, and an exotic-looking bladed pincer. We are quickly left in no doubt about the R-rated violence that is to follow and the sadistic nature of our bad guys.

Showdown in the woods

The first major set piece takes place during the famous New Orleans Mardi Gras. It is full of classic eighties-style action with blazing Uzi machine guns and stuntmen swan diving in slow motion from great heights. There are some impressive stunts, with the performers falling onto the tarmac from fast- moving motorcycles and horses.

Michael Dudikoff just has a few rudimentary punches and throws to perform initially, but there is enough here to establish his considerable athleticism. To verify that his foes will be worthy opponents, a kendo bout filmed in long, wide takes, brings with it some martial-arts authenticity. A fairly wild car chase reminded me of the old “A-Team” television series, featuring several outlandish but thoroughly entertaining stunts, jumps and crashes. 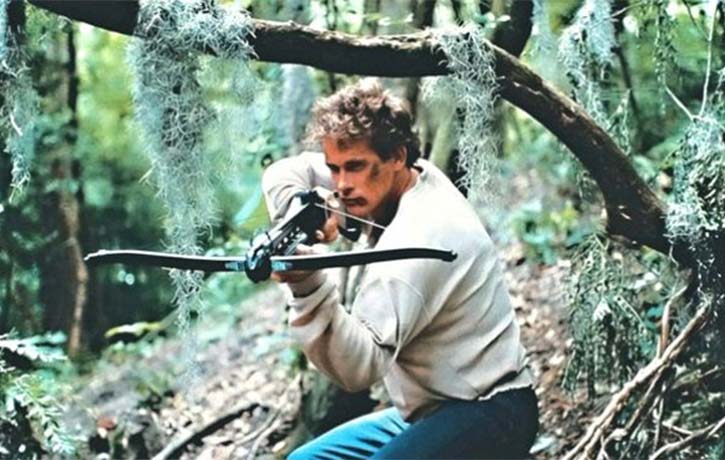 Dudikoff Perfoms Many of His Own Stunts

Aside from any fisticuffs, Michael Dudikoff is especially impressive in the performance of many of his own stunts. He leaps, swings and zip lines his way about, as he dispatches various henchmen, often in unbroken takes so we can clearly see that he is rarely doubled.

The finale takes place in the rain-soaked marshes and I can only imagine how tough it must have been to film in them. The action is built much more around Dudikoff’s fighting skills rather than some of the earlier shootouts. He displays a credible, versatile ability to fight with weapons, karate, wrestling, judo and good old-fashioned duking it out! With his skill set, good looks and acting abilities, it does make you wonder why he didn’t quite make it onto the A-list alongside stars like Sylvester Stallone.

It’s funny how many 1980’s American action movies are painted as right-wing political fantasies. In this movie it’s the bad guys who hold some thoroughly distasteful right-wing views, and they are, quite correctly, far from glorified.

An essential purchase for fans of 1980s action films

Watching it some 34 years later, it is a sad fact that some of these beliefs still seem to exist in certain sections of society, and I’m sure this will resonate with modern viewers. In addition to their political views, these are properly sadistic, old-school bad guys. They have no qualms about cold-bloodily harming women and children to achieve their ends, or even just for kicks. It makes it much more satisfying when our hero dishes out the justice!

Michael Dudikoff is an engaging lead. He has the looks of a young Lee Majors, handles the dramatic and emotional scenes admirably, and of course can knock the action out of the park. It’s astonishing to think that he only formally trained in the martial arts for his role in the preceding year’s “American Ninja”. The supporting cast of bad guys play it so suitably nasty, you will almost find yourself booing at the screen whenever they appear.

The Blu-ray itself is another superior presentation from 88 Films, with excellent picture and sound quality, some great limited-edition postcards (first edition only), an introduction to the movie by Director Sam Firstenberg, audio commentary from Sam Firstenberg and Michael Dudikoff, as well as an interesting interview with star Michael Dudikoff.

I felt a wonderful sense of nostalgia watching “Avenging Force”. It brought back to me the joys of renting a shamelessly entertaining action film on VHS. Fans of that classic era of American action B movie, will find this to be in the top tier of Cannon’s back catalogue of such movies, making this an essential addition to their collections!

The Pentangle are a group of sadistic right wing terrorists

“Avenging Force” is OUT NOW on excellent Blu-ray, order your copy via 88 Films or Amazon!

Got Avenging Force? Then inform and direct it like a true warrior and get into the FU-niversity of Top 5’s, Top 10’s, these compelling interviews, put your force -whilst training- in KFK OFFICIAL wear and subscribe for more cult 80’s fight action and more on YouTube!

MMA: 5 of the Biggest Upset Wins in History