KFK regulars surely don’t need to be told who Scott Adkins is, yet following hot on the heels of his dynamo villainous turn in the martial arts mega-ensemble “Triple Threat“, his performance in “Avengement” is a genuine shocker. Under the direction of stunt veteran Jesse Johnson, “Avengement” sees Scott tackle the role of Cain Burgess, a man railroaded into prison and forced to transform himself into, in his words, “a hardened, rusty nail” in order to survive. When he breaks out of captivity, revenge is the only thing on his mind, but he’s also a believer that it’s a dish best served cold, and recounts his story to a band of captive thugs in a London pub whilst we see flashbacks to the hellish life he’s lived for the last several years.

And talk about a metamorphosis – not only does Scott transform physically with a burned and scarred face, but his portrayal of Cain is that of a man who’s made himself into a beast just to stay alive. On top of that, the abundant fight sequences “Avengement” comes packed to the gills with, are among the most savage you’ll see in ages, including a bull-in-a-china-shop smackdown in said pub that makes it an instant Bar Fight Hall of Famer.

Today, Scott sits down with us to share a behind-the-scenes view on the making of “Avengement”, including the process of crafting the film’s astonishingly brutal martial arts action scenes, and the makeup process to bring Cain’s prison scars to life on-screen!

Hi Brad, I’m doing great, thanks. Happy to be back with Kung Fu Kingdom today!

Awesome! Okay, well let’s start with how you came aboard “Avengement”. What can you share about the experience of making it and re-teaming with director Jesse Johnson?

Scott preps for the next shot in Avengement with Jesse Johnson

The fight sequences in Avengement get savage

Well, this was our sixth movie together. Jesse and I have a great working relationship, and I’ve always liked that it never feels like we’re regurgitating the same stuff, every film we’ve done together has felt completely different. What I really loved about “Avengement” was that the character of Cain is completely different from anything I’ve ever done before, and I had the chance to really develop the character and the story with Jesse and my friend Stu Small, who was the screenwriter. I’m really happy with how “Avengement” has turned out, and I can’t wait for people to see it.

Same here. So, what were some of the more memorable experiences of making “Avengement”?

Sitting in that makeup chair and getting Cain’s face put on was really memorable (both laugh). Really, we had a lot of great actors in “Avengement”, so just having the chance to work with all of them was really great. I loved working with Nick Moran, he’s a great collaborator, and Craig Fairbrass really knows how to channel an intimidating character.

Especially, given my character, we wanted Cain’s brother also to be able to walk into a room and have everyone immediately scared of him, he’s even more intimidating than his little brother, and Craig really pulled that off. Making “Avengement” also felt more like we were doing a piece of theatre at times because the scenes in the pub where I’m telling my story to the other characters went on for ages, so that made the experience really enjoyable.

On the makeup side of things, your character’s got rather extensive facial burns and metal dentures in the film, tell us more about that.

Well, the metal teeth were made just outside of London by some prop people who work on a lot of big movies. They were really simple, you just slip them on. It was about an hour in the makeup chair every morning, and I’ve done much longer than that. It was three hours in the makeup chair for “X-Men Origins: Wolverine”, and “Doctor Strange” was a pretty extensive makeup job as well. But it was still fairly significant, and also a little complicated, because we might put the full make up on in the morning, then have to take some of it off when we were doing a scene where I didn’t have as many scars, then put them back on when I did. So it can be a bit of a pain, but you do it for the sake of the character.

On that note, the fight sequences in “Avengement” are some of the most savage seen in any of your films. How was the process of designing the action? What can you share about creating the film’s incredible bar fight sequence?

Scott takes no prisoners in Avengement

Scott with Greg Burridge on the set of Avengement

Well, we wanted the film to feel very real and hard-hitting, and just make the fights feel very visceral and brutal. Dan Styles and Luke LaFontaine did a great job designing the fights to have that visceral feel, and of course, I had a lot of input on it as well. We also had a lot of great stunt people on the film like Lee Charles, Ross O’Hennessy, and Mark Strange – it’s hard work putting together fight sequences like this, so it’s really great to have a lot of professionals like we did who really know how to do it.

When it came to the bar fight, I could tell by the end that we needed more time to make that fight into what we really wanted it to be. We all felt that the film was really building to that point, and if we didn’t deliver, we’d be short-changing the audience. So, I really lobbied the producers for the time we needed to do that sequence of the film properly and have the film go out on a bang. I’m really glad I did, and I think everyone involved with the film is too!

Having seen it, we’re glad you did, too. So, were there any injuries or mishaps in filming the fights in “Avengement”?

I actually smacked Mark Strange in the face with a bat. I hit him so hard, I thought I’d broken his nose, but he’s such a tough lad, he just laughed about it. (Laughs) A lot of the guys were really prepared to take a lot of punishment. Lee Charles is a tough lad and a great kickboxer, I’ve done several films with him before, and he’s ready to let me kick him in the head for real if we have to. I had to hit him in the face with a cosh, and he just kept telling me, “Yeah, go on, just do it mate, brilliant!”

(Laughs) Real commitment there! Well, just before we wrap here for now Scott, what other projects do you have in the pipeline following the release of “Avengement”?

I have “Ip Man 4” coming out later this year, and I also have a sci-fi action comedy called “The Intergalactic Adventures of Max Cloud” coming up as well. And I’m also doing a spy thriller right now called “Legacy of Lies”.

Eagerly looking forward to all of them…Thank you so much for the pleasure of speaking again today, Scott. We wish you all the best with “Avengement” and all your other exciting action projects – can’t wait to see you opposite Donnie Yen in “Ip Man 4”!

Thanks Brad, always a pleasure to speak with Kung Fu Kingdom!

Jesse Johnson talks Scott through a scene in Avengement

Scott gets an effective makeover as Cain in Avengement 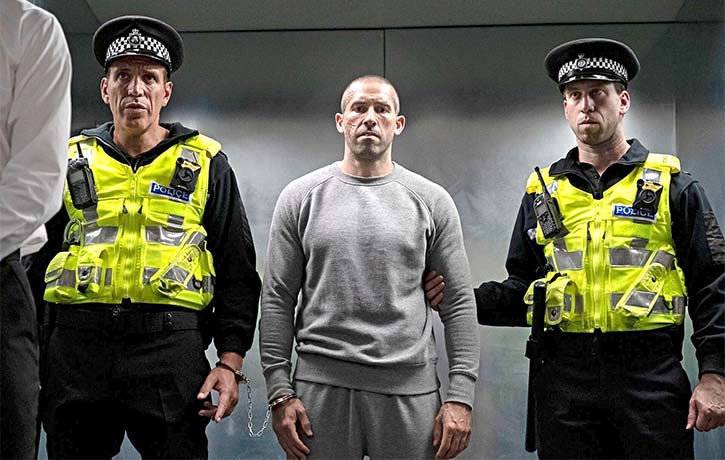 “Avengement” is now available in the US on Video on Demand platforms, June 17th in the UK, and will soon be rolling out internationally. How amped-up are you to see Scott in this edge-of-sanity role and the electrifying fight scenes that come with it? What are some of your all-time favourite bar fight scenes? Let us know in the comments below; Like, share and join in the conversation on Facebook and follow us on Twitter & Instagram. Enter the House of FU-thrills with these other Top 10’s, reviews, grab some official KFK hoodies, t-shirts and more and don’t forget to subscribe on YouTube for videos!