The True Adventures of the World’s Greatest Stuntman

Synopsis:
“The True Adventures of the World’s greatest Stuntman: My life as Indiana Jones, James Bond, Superman and other movie heroes”, is the autobiography of British stuntman pioneer Vic Armstrong.

Some of his colossal achievements include being awarded a BAFTA, an Academy award, the Taurus stunt award, being listed in the Guinness Book of World Records as the most prolific stuntman on the planet, and oh, let’s not forget his meeting with the Queen.

The book has many chapters charting Vic’s almost five decades’ spent in films and undertaking stunts. It is a conventional autobiography with the first couple of chapters telling us about his childhood story on through to his break into films, the amazing stunts he’s been involved in, moving into directing and ending with his references to the last film he was working on when finishing the book: the 2012 reboot of “Spider-Man”.

Would the real Indy please stand up

Vic with his wife and fellow stunt performer Wendy Leech

Working out the stunts with Steven Spielberg and Harrison Ford

With Sylvester Stallone in Rambo III

The book’s cover instantly gives a sense of daring and adventure giving you a clear indication of what to expect; an image of Vic Armstrong in the iconic Indiana Jones costume, jumping from an unstable rope bridge in a classic scene from the movie “Temple of Doom”.

On opening the book, the very first page highlights the respect and kudos that Vic Armstrong carries within the film industry.  Not many people can get a personal quote from so many luminaries such as George Lucas, Arnold Schwarzenegger, Angelina Jolie, Sir Christopher Lee, Martin Scorsese and Pierce Brosnan to name but a few, yet here they all are on the same first page.

We then come to the contents and with over 50 chapters, the book is a good size and the chapter titles highlight either an interesting story or one of the films Armstrong has worked on. Following this, the next page is another indicator of Armstrong’s status in the industry – an esteemed foreword by Steven Spielberg no less.

As expected with an autobiography, the first couple of chapters relate to Vic’s early life giving us a few stories from his youth, a fair amount about his family influences including his Olympic gold medal winning father and growing up surrounded by horses. Armstrong proceeds to tell us how he first started out as a jockey, working with horses before getting his break in the film industry as a stuntman.

Vic orchestrated the mayhem in the Brosnan James Bond films

The rest of the book’s over 300 pages is a collection of poignant stories of his time as a stuntman, doubling for some of the world’s most famous actors, and how his work progressed into stunt coordinating and second unit directing before onto directing his own films.

Such titles discussed range from the epic Indiana Jones trilogy, to Superman, James Bond, Rambo, Starship Troopers, War of the Worlds, I Am Legend, Valkyrie and much, much more. The stories weave together into an easily assimilated reference work of how the industry operates as well as giving us the lowdown on the unique and riveting life that the man Armstrong himself has led.

To close the book Vic retrospects for a few pages on his career and summarises his thoughts on how filmmaking has evolved over the years. 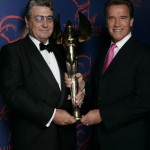 Receiving the Taurus Award from Arnie

Vic Armstrong’s accounts are as interesting and informative as they are fascinating and incisive -all eye opening stuff of legend. Stacked with gems of rare movie world insight, this will surely enthrall fans of big budget, Hollywood action movies and stunts. Students of film will likewise delight in the filmmaking process Vic discusses here answering many heretofore enigmatic questions covering a large archive of his best known films and work.

The book is well written with chapters that flow nicely. The photos are superb adding significant gravitas and fun while bringing the chapters to life. Each photo adds something quite special and I’m sure Armstrong could easily produce a book filled to the rafters with amazing photos collected over the years. I for one, would certainly relish a coffee table style version of it!

I have to say, I love this book as my clearest window into this business and would thoroughly recommend it, not only to anyone into action-filled movies and stunts, but to anyone keen on movies -period! Christmas is not far away, and this has got to be one of the ultimate gifts for any movie fan.

Relating to the James Bond film “Tomorrow Never Dies”:
“When we first came up with the arms deal idea, the producers wanted to know exactly what was going to happen. ‘Tell you what,’ I said ‘let’s give them the biggest shoot ‘em up of all time, let’s give Bond a jet fighter on the ground that he can use as a big handgun and shoot the crap out of everything”.

While in a meeting preparing for filming “Krull”:

“But how do we make them look as though they’re galloping faster than light?’ they asked. And therein lay the problem. You can’t under crank horses to make them go fast like Charlie Chaplin, it looks silly, and you can’t slow-mo them either like the Six Million Dollar Man. ‘ What I would do,’ I said finally, ‘is shoot them against a blue screen.’ They both looked at me like I was nuts. ‘What do you mean, shoot them against a blue screen? You’d have to have a blue screen a mile long.’ Not quite, because I’d already visualized in my head using a treadmill in the studio so the horses could gallop on the spot. ‘Have you got a treadmill?’ they asked. ‘Course I haven’t, nobody’s done it yet, we’ll have to invent it and build it.’ As the meeting drew to a close the two men still looked unconvinced.”

On Harrison Ford during a break in filming:

“Around this time Harrison had gotten into tennis, and was so p***ed off because his wife Melissa had bought him this posh new ceramic tennis racket, which cost something like $400, while the rest of us were playing with normal rackets. ‘I told her not to buy this,’ he complained. ‘Now when I walk out on the court everybody will think I can play the bloody game.’ He was only learning like the rest of us.”

On the stunt profession:

“I guess it’s that kind of sense of humour that sets stuntmen apart from the rest of the human race. We’ve always had a reputation for it. We do have these wild moments. And if you don’t, then you haven’t really got the right temperament to be a stuntman. Although it’s all calculated and worked out, you still have to have the edge to you to the job that we do. Otherwise it would be so boring, it would be like going to a regular job, and that’s not what we want to do. We are different from normal people. You could be hanging around a set for days, but then you’ve got to be ready at a moment’s notice to be at 100%, full bore capacity to do what you’re paid to do. It’s a different kind of job and a lot of people can’t take it.”

A great message from Harrison Ford