The Treasures of Bruce Lee 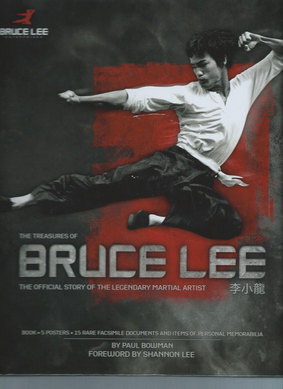 This is how you do a book cover!

The latest literary tribute to the legendary Bruce Lee, the book goes far beyond a mere biographical account of his life, of which there is no shortage. Author Paul Bowman interweaves liberal illustrations into the book’s narrative, many of them never-before-seen photos of Bruce Lee’s life both before and after his rise to worldwide fame. This serves to layer the narrative of Lee’s legacy with impact, be it on martial arts, movies, or philosophy, and truly captures the iconic importance of Lee’s life. The book also includes a foreword by Lee’s daughter Shannon, as definitive an endorsement as one can hope for in all things related to the founder of Jeet Kune Do (JKD).

“The Treasures of Bruce Lee” certainly lives up to its title! Beautifully and impressively presented, the book is quite literally stuffed with information, 5 posters, 15 rare fax documents among photographs and other personal memorabilia that paint a vivid and powerful picture of his life. There is a distinct feeling that the reader is being given almost a behind the scenes look into details both great and small – his days in Hong Kong studying Wing Chun under the renown Sifu Yip Man, his pilgrimage to America, his research into the science and philosophy of combat that served as the genesis for his personal expression of martial arts known as Jeet Kune Do, his struggles to gain acceptance as an Asian man in the Hollywood of the 1960’s and 70’s, and his eventual ascension to global fame as the undisputed king of martial arts cinema – no stone is left unturned. The narrative of his life story is further brought to life by the extensive use of illustrations, everything from Bruce sporting the world-famous Kato suit to something as seemingly minor as a backyard training session. Perhaps most tantalizing, however, is the memorabilia that accompany the book as veritable stocking stuffers. Readers will be able to hold in their hand replicas of everything from personal notes written by Lee’s own hand to a ticket stub for “The Way of the Dragon”. And, of course, posters for his films!

For fans of the Dragon, “The Treasures of Bruce Lee” is simply a must have. And while they’re likely to already be intimately familiar with his life, the book is testimony to the notion that there are some stories that never get old, no matter how many times we’ve heard them told, additionally, there are bound to be nuggets of fresh or new material for serious fans. For everyone else, “The Treasures of Bruce Lee” paints a radiant picture of a man whose life and commitment changed the world. This is the immaculate collection to get for anyone with an interest in Bruce Lee!

“From the outset, it was clear that Bruce Lee was much more than just a movie star or martial artist. It is easy to see why. His friends and students all looked up to him as a kind of guru, and his philosophy shines through both his writings and in all the screen roles into which he had creative input or control.” —Page. 76

“The legacy of Jeet Kune Do extends from the physical reality of how myriad people train in martial arts to the transnational reality of global cinematography. Along the way it stretches into sport, music, popular culture and even a philosophy that bridges Eastern and Western styles. In other words, the legacy of Bruce Lee’s Jeet Kune Do is not singular. It is multiple. The legacy of Bruce Lee’s JKD proliferates, abundantly and in more contexts than one might ever have expected.” –Page. 88

“I’m lucky because even though I lost my father at a young age, he continues to teach me, guide me, and inspire me (even parent me) through these bits and pieces of himself that he left behind (his writings, his treasured books) and through the example of his now almost legendary life. And now he can do the same for you perhaps; that is, if he hasn’t already!” – from the forward by Shannon Lee