It’s been an unforgettable journey, but like all good things, “The Legend of Korra” now comes to an end. Without such an ebb and flow, there would, of course, be no balance in life. How fitting, then, that the final Book of our heroine’s adventures as the Avatar should be titled “Balance”. It’s not only the assault of a gigantic mechanized war machine on Republic City that Korra must face down, but her past experiences as the Avatar that threaten to completely kill her spirit. Just as in “Avatar: The Last Airbender”, the series may be wrapping up, but not before truly putting its title character to the test one more time.

Janet Varney reprises her role as Korra, the Avatar tasked with bringing balance to the world, while J.K. Simmons returns to portray her Airbending mentor Tenzin. His family is once again in tow, with Maria Bamford voicing Tenzin’s wife Pema and Kiernan Shipka, Darcy Rose Byrnes, and Logan Wells voicing his three children Jinora, Ikki, and Meelo. The New Team Avatar is also back, with David Faustino, P.J. Byrne, and Seychelle Gabriel again voicing Korra’s close friends Mako, Bolin, and Asami, while Mindy Sterling and Anne Heche return to voice the Beifong sisters, Lin and Suyin.

Several new characters introduced in the previous season are back, such as Suyin’s daughter Opal, voiced by Alyson Stoner, and Kai, voiced by Skylar Bringman, while characters seen in past seasons gain much greater prominence in the final season, including Varrick, voiced by John Michael Higgins, and his assistant Zhu Li, voiced by Stephanie Sheh. The elderly Katara is back for a brief appearance or two, voiced by Eva Marie Saint, as well as Toph Beifong, voiced by Philece Sampler. Korra will need all the help she can get from her old and new friends, however, once the villainous plot of Kuvira, the fiercest soldier of Zaofu voiced by Zelda Williams, begins to unfold.

Zhu Li has taken a liking to Varrick

Opal and Kai prepare to join the fight

Three years after the defeat of Zaheer and his followers, Republic City and Team Avatar are bouncing back as best they can. Tenzin’s daughter Jinora bears the tattoos of an Airbending master, while Mako now performs bodyguard services for Prince Wu, soon to be crowned ruler over the Earth Kingdom. His brother Mako, along with industrialist Varrick and his assistant Zhu Li, now lend their services to Kuvira, general of the forces of the city of Zaofu who believes the time has come to reunite all Earth Kingdom territory under a single flag. Her proposal seems reasonable enough, until it becomes clear that her true goal is to establish a new Earth Empire under her rule. Only the might of Avatar Korra can put a stop her conquest, but she has barely recovered from her crippling injuries at the hands of Zaheer and has unfortunately been AWOL for months. It will take the guidance of someone who was one of her closest allies in her previous life, to get her back on her feet and into the fight once more.

As with its predecessor, “The Legend of Korra” has always been great at showing how the events of the previous season feed into and affect the next, but never has Korra started out at such a disadvantage – she’s just learning to walk again, reeling from the poison Zaheer had slipped into her bloodstream, unable to enter the Avatar State, and experiencing an all-around case of PTSD. Korra’s handicaps at the show’s beginning are where the series’ usual cameo by Katara comes into play, but it’s also what facilitates Toph’s return. Now a cranky old hermit living in a swamp, Toph hasn’t changed a bit, still relishing every opportunity for a fight and able to Earthbend like she isn’t a day over twelve. Korra spends two whole episodes partaking in the same experience Aang once did with the same Earthbending teacher – getting pummeled and pushed to her limits in Toph’s effort to whip her into shape. Their sparring scenes here really showcase just how far Korra has to climb and how powerful an Earthbender Toph still is in her 80’s.

Kuvira stomps into Republic City in her massive Mecha Tank

Korra is ready to be the Avatar once more

Korra recovers and prepares to counterattack

Korra comes in with every element from every angle, while Toph easily dodges and launches a strong counterattack with her hands literally behind her back. Toph also helps Korra regain her control of the Avatar State, and her involvement in “Book Four” doesn’t end here. She pops up again later in the season to further lend her aid to Team Avatar, which leads to the inevitable reunion of the Beifongs.

We’ve seen in the past few seasons the bad blood that exists between Lin and Suyin, but the family truly gets the chance to reconcile with Toph’s return. Don’t expect her to stick around, though – as Toph herself points out before departing for the swamp once more, “At some point, you’ve gotta leave it to the kids!”. Toph ultimately sits out the final battle of the series, but her tutelage of Korra – the second Avatar she’s mentored – is still a very welcome return of such a beloved character by fans of the series. It’s also a clever tribute to another epic classic -a wise, ancient mentor figure living in a swamp trains the Chosen One to harness their skills and face their destiny-sound familiar?

What punishment Korra didn’t take from Toph, she receives at the hands of Kuvira and then some. In attempting to quell Kuvira’s conquest of the Earth Kingdom, Korra tries to take the diplomatic approach first, and when that fails she challenges Kuvira to a duel only to endure a merciless beating. While not quite as over-the-top as her battle with Zaheer in the previous season, Korra’s initial matchup with Kuvira is rough, brutal, and just about as violent as the bending action got in “Book Three”, with no shortage of arrogant taunting from the villainess.

Korra has at last re awakened the Avatar State

Korra always gets back up when shes been knocked down

Jinora leads the search for the Avatar…

Ever more so than its predecessor, “The Legend of Korra” always knows how to make hits look painful in animated form, while also remembering to keep the action just tame enough to be appropriate for children. However, Kuvira’s plot involves something far more sinister than simply bending her enemies into submission. Her forces set to work, harvesting spirit energy in order to harness the ultimate weapon, a colossal Mecha-Tank suit armed with a plasma canon full of pure spirit energy! The entire “Avatar” franchise has always had a strong steam punk element, but never have we seen a 50-story Jaeager from “Pacific Rim” stomp its way into either show until now.

Kuvira’s assault on Republic City in the giant Mecha Tank-leads into the two-part series finale – “Day of the Colossus” and “The Last Stand”, with all of Team Avatar fighting to bring it down as it rampages through the city. Of course, the series can’t go out without a rematch between Korra and Kuvira, and as with the Mecha-Tank battle itself, it doesn’t disappoint. The resolution unexpectedly takes a very different turn from the finale seen in “Avatar”, however, one that shows Korra employing the spiritual aspects of the Avatar in a way not seen before but still not cheating the viewers out of their thirst for one last epic smackdown!

Good to see you again Twinkletoes 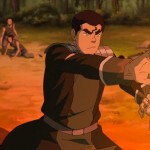 Asami stays by Korras side during her recovery

Korra’s incredible adventure as the Avatar reaches its conclusion at last, and the parting is as sweet a sorrow as it was for Aang. With its extraordinary characters, gorgeous Anime-influenced animation, astonishing action sequences that raise the bar for animated martial arts, and ever-captivating storytelling, “The Legend of Korra” is not only a fantastic continuation of an unforgettable saga, but an unforgettable saga all its own. Way to go, Mr. Konietzko and Mr. DiMartino – then, as now, these guys really know how to end a series on a high note!