Home » Reviews » Books » The Drunkard Kung Fu and its application

The Drunkard Kung Fu and its application

The Drunkard Kung Fu and its application is essentially a training manual for a Southern-style Kung Fu form titled ‘The Eight Drunken Immortals Form’.

Over 95% of its 161 pages are filled with photos of the form, how to execute the movements and its applications.

On the cover it states that it is the ‘Only book on the complete system of the most famous Southern style of the Eight Drunken Immortal Kung Fu’. Even though this book is 30 years old and out of print, I understand this is still true today.

Throw away the wine pot!

Further footnotes on the movement

There are many books available for certain martial arts, Karate has many different books available to read and study, Judo has the same as does Tae Kwon Do, etc. There are only a handful of books available if you wish to study the art of Drunken Kung Fu though, which surprised me at first as one of the most famous Kung Fu films is titled ‘Drunken Master’ and stars well know actors Jackie Chan and Hwang Jang-lee.

You can read our review of this cult classic here if you’re interested!

This book is not a complete study on all Drunken styles; it is very specific and relates only to the “Eight Drunken Immortal Kung Fu”

The first 6 pages provide a brief history of the style, reference to other drunken styles (including the well known Northern Style Drunken Monkey Kung Fu), an analysis of the form, and points to note on how to use the book.

We then jump into the form and the next 70+ pages are clearly laid out in the format of 4 photos per page with clear instructions to assist in learning the form.

Following the form, we find 60+ pages of application of the form, which is not always present in martial arts books (or even in class-based lessons). It makes a refreshing change to see so much application of a form and the photos that are included clearly show this, as well as providing text explanations alongside the images.

The book then closes with a brief profile of Sifu Chiu Chung Yat and a couple of pages of footnotes regarding the movements of the form. 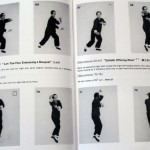 As stated earlier, this book is 30 years old and out of print. However, it is still fairly easy to get a copy if you wish to study the form and style. I should note that a book cannot replace a teacher, so this should be studied alongside traditional Kung Fu classes. However, with the rarity of teachers who can teach Drunken styles (particularly in the West), if you do wish to study the art, this book is a very good starting point.

You do not get in-depth analysis and history of Drunken Kung Fu in this book, it is almost all dedicated to the one form; that said, it is a really interesting study of the form and style and will help you if you are interested and cannot find or locate a teacher.

It should be noted that the book states that this form is for Demonstration purposes only, as is the case with many forms and styles. All forms will ultimately help with the application of technique.

‘The “Drunkard Kung Fu” as explained and exemplified in this book is an example of such a kind of “demonstrative Kung Fu”, therefore a beginner who pursues studies in this Kung Fu form should note that when performing exercises for singles he should pay attention to rhythm of movements and beauty of appearance, and not the practical usage of the movements. ‘
‘After the death of Red Brow, Chiu Wan Lung practiced the “Eight Immortals Kung Fu” form by chanting the Singing Formula and looking at the pictures on the wall of the cave, but with little progress. Being perplexed and bored with his repeated hard exercises he began drinking wine. Feeling a little tipsy one day, he found that he could perform more easily the movements illustrated by the wall pictures. From then, everything that he felt perplexed about before, now suddenly became clear to him! ‘

A quote from part of the form that describes 4 separate pictures: ‘Chiu makes one right-foot forward stride and crouches down as if to get hold of a wine pot, and then he lifts it with both hands.’

Regarding Sifu Chung Yat: ’During the Second World War he had to follow his family to return to their native place. Later he arrived at Kuk Kong, a county in South China, and he settled down in the Nam Wah Monastery. There was a highly skilled Kung Fu practitioner residing there, and, knowing that the youngster Chiu Chung Yat was fond of Kung Fu, he taught him the skills of the Shaolin Luk Hop Form and the Eight Drunken Immortals Form. Chiu stayed there for years and obtained impressive progress in his studies.’