Shifu Shi Yanzi recently hosted the 3rd Annual Shaolin Cultural Festival at the London Soccerdome in Greenwich.   London played host to a large contingency of monks from China as well as practitioners from all over Europe.

The day had many treats in store for us including a host of free workshops in Sanshou Sparring techniques, Qigong from Shifu Yan Lei, and even a type of Shaolin Yoga taught by one of his disciples. There was plenty of room and many of the colourfully dressed attendees were keen to take part the proceedings.

Saturday’s event played host to traditional form competitions as well as a Sanshou Tournament which concluded on Sunday. Many of the students were present on Sunday as well proudly wearing their medals.

Oliver a 15 year old student who travelled with his family all the way from Bristol for the weekend winning a silver and a gold in the forms competition says that he likes Shaolin Martial Arts because of the variety or elements that you can get to learn.

The day was also full of demonstrations including a double helping from Baba Deep Singh’s Gatka Impressive Weapons troupe. The event was headlined by an hour long demonstration from the Monks of Shaolin themselves which was well worth the entrance fee alone!

The Monks and Abbotts moved about freely in this unique opportunity to integrate with the public. A special guest appearance was made by the Mixed Martial Arts celebrity Alex Reid who graciously took part in the Qigong workshop and gave his support for the new upcoming movie “Iron Monk” created by Jason Ninh Cao. It will star Shifu Shi Yanzi of the London Shaolin Temple, multi-time Taekwondo Champion, the herculean Silvio Simac and renowned British Martial Arts Champion, Zara Phythian

With “Iron Monk”, Jason Ninh Cao aims to bring real combat back to the cinema with the movie promising to deliver an action packed production without the need for wires or CGI. The movie project is the subject of an Indiegogo campaign to raise funds for the full production. Those present at the stand were treated to an introduction to the project from the creator Jason Ninh Cao himself and a screening of the trailer.

Hiu Cong Liu, a Wushu Sword Champion over from China treated us to an awesome display of her skills as she, amongst others auditioned her skills for a potential part in the film in front of Jason and his Director Mat Sunderland.

Here is a link to the crowd funding page: https://www.indiegogo.com/projects/iron-monk

All in all this was a great event with something for just about everybody. The Shaolin Cultural festival was much more than just about martial arts. There was a lot more culture to be had in the form of Traditional Music, Calligraphy, Chinese National Treasures (the Chinese Zodiac heads were on display) and an in depth demonstration of the Chinese Tea Ceremony. Highly recommended for Shaolin veterans and novices alike. 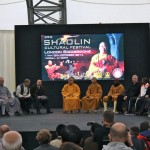 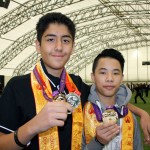 Mike Heanue takes it on the chin from Iron Monk Jason 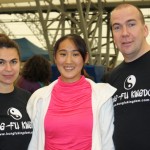 All eyes on the Shaolin kid

Cengiz Dervis does the Dim Mak!

Mike or simply Drill-bit to his close friends has been hooked on Martial Arts ever since Mr Miyagi made it ok for men to wax. A lifelong Martial Arts practitioner and now Kung Fu Instructor, Mikes punchy reviews take an unusual stance on what you thought you knew!!! If you don't know you better axe somebody!!!