S.W.A.T. the 1970’s TV cop series “S.W.A.T.” was rebooted for modern times with the eponymous 2003 reboot. While that movie hit theaters, the sequels “S.W.A.T. Firefight” and “S.W.A.T. Under Siege” moved to straight-to-video pastures, which by modern-day action movie standards tend to be of a considerably greener sort.

In the case of “S.W.A.T. Under Siege”, it gets the job done with action sequences adapted to a lightweight budget with the always great Michael Jai White on-hand as the movie’s most memorable character, but does it hit the highest echelons that it strives for? Continue on to find out!

Also seen in “S.W.A.T. Under Siege” are Ty Olsson as Ward, Olivia Cheng playing Chu, Garvin Cross as Weir, and Monique Ganderton in the role of Simone. 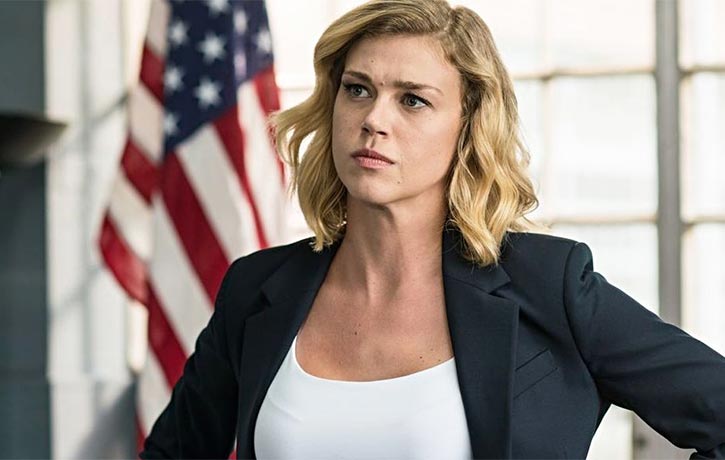 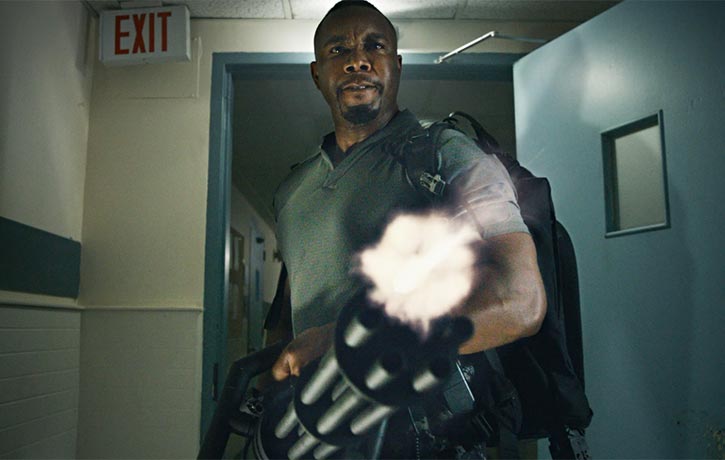 When the DEA is tipped off to a drug shipment at a local warehouse, the team arrives only to engage in a harrowing shootout with the waiting gang.

When the chaos is over, they discover the contents of the gang’s truck is not drugs, but a man known only as “Scorpion” chained inside. The team takes Scorpion to their headquarters, only for a terrorist group to arrive demanding that he be handed over.

At this point, Scorpion reveals himself to be a spy, and is in possession of an unidentified item worth potentially millions to them.

With the team fortifying the S.W.A.T. office, they must stand their ground against their attackers, while trying to navigate the revelation of a mole hidden amongst their ranks.

Scorpion is held captive for intel 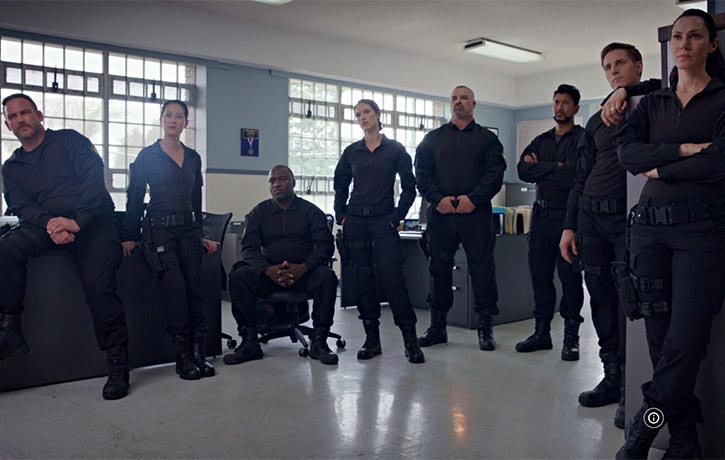 “S.W.A.T. Under Siege” is definitely budget action filmmaking, operating mainly in just a handful of warehouses and office buildings as its main locations.

Despite this, it makes pretty good use of its resources, which is more or less the general level that the movie itself achieves with its gunfights and martial arts battles.

Other than Scorpion, the characters are thinly written archetypes, though they tend to snag a memorable moment or two with fight-scene money shots or heroic sacrifice one-liners.

Adrianne Palicki’s role as Agent Dwyer is one of the movie’s areas of equal levels of hitting and missing. Palicki really showed what she could do in an action role as Perkins in “John Wick”, but only gets to moderately shine in a handful of decent-but-not -spectacular fight scenes. With that said, her performance as Dwyer ends up being memorable for a much more unexpected reason.

Michael Jai White steals the show in “S.W.A.T.”, being both calmly understated in his performance as Scorpion and casually crisp in his fight scenes.

One can’t help but hope for “S.W.A.T. 4” to be a Scorpion-centric spin-off, the mysterious spy cool at all times and completely unperturbed by his arrests that he quite easily finds ways to escape from.

The relatively confined setting of “S.W.A.T.” makes the action fittingly claustrophobic when the bad guys finally bust in, and the shoot-outs are decently well-orchestrated.

Still, Michael Jai White’s fight scenes are the stand-out element of the movie, consistently involving a restrained escape of some kind, until Scorpion’s final one-on-one with Lars, paralleled with Travis Hall’s fight with the villain’s associate, Gutierrez.

Dwyer and Hall discuss how best to proceed

The SWAT team formulates a plan

As the third movie in the “S.W.A.T.” franchise, “S.W.A.T. Under Siege” is a not a bad 89-minutes of action movie entertainment.

The film does a decent job of drawing with the lines of the budgetary restrictions it’s flying under, but doesn’t quite manage to go above and beyond them as is usually seen with today’s straight-to-video action movie economy, and largely underutilizes Adrianne Palicki.

Still, Michael Jai White gets in some solid fight scenes with his self-assured performance as the confidently adaptable Scorpion. “S.W.A.T. Under Siege” is a mixed bag in the end, but if you’ve got 89- minutes to kill, it does its job to a respectably entertaining degree.

Dwyer and Scorpion have a little chat

The team brings Scorpion in

Have you seen “S.W.A.T. Under Siege”?  What are your thoughts on the movie’s action scenes and Michael Jai White’s performance as “Scorpion”? What is your favorite movie in the “S.W.A.T.” movie series? Let us know in the comments below; Like, share and join in the conversation on Facebook and follow us on Twitter & Instagram!

S.W.A.T. all your troubles away in the KINGDOM of FU with these Top 10’s, Top 5’s, exclusive interviews, awaken your SCORPION-LIKE COMBAT style in KFK wear, and subscribe for more high-powered FU on YouTube!

Adesanya is a Huge Favorite to Defend His Title Against Cannonier