The Kung Fu Stick Stickly is back in action again in “One Finger Death Punch 2”, the cheerfully colorful, unapologetically flamboyant, and gleefully over-the-top sequel to its 2013 predecessor. Like its earlier namesake, “One Finger Death Punch 2” is at once a love-letter to classic kung fu cinema, and a thrilling training ground for fighting game aficionados to try their hand at something that blends simplicity and complexity into a veritable explosive, elemental cocktail of fu!

A clinch in the heat of battle

One Finger Death Punch 2 is a visual feast

A perfect jump spinning back kick

The gameplay of “One Finger Death Punch 2” is predicated on flash and pizzaz. Every stage is illuminated with a ticker tape parade of explosive color and equally explosive action, especially coming in response to the skill of the player involved. The 2-D plane of the game not only affords players great control over their avatar’s range of motion, but also turns just about the entire game into a protracted series of money shots.

Taking a page out of the “Street Fighter” playbook, each mash of the button leaves the on-screen fighter in a snap shot of a given technique, ranging from punches, kicks, weapons strikes, and various traditional stances. With the rotation of enemies calling upon the player to strike in rapid succession, the end result is a montage of kung fu shapes pulled right out of a Shaw Brothers movie, and the game is cognizant to let each distinct technique or stance linger just long enough to register with the players individually.

Standing his ground against his enemies

Since the player is essentially on a conveyor belt against a seemingly virtually endless succession of enemies, the game plays out almost like a flip book of hundreds upon hundreds of faceless enemies getting kicked in the face. Coupled with the dynamic color scheme and meticulous detail put into each stage, and “One Finger Death Punch 2” ups its game as a virtually ceaseless blast of quite literally non-stop action. As far as “beat ‘em ups” go, “One Finger Death Punch 2” more than delivers gamers a solid bang for their buck.

Like its predecessor, “One Finger Death Punch 2” also trades on the power of its own simplicity, and this proves to be an arena in which it thrives. With both the player’s avatar and their barrage of enemies depicted as faceless stick men with no real backstory or identity, the game isn’t one in which the story or characters are of any significant relevance. However, that’s ultimately beside the point, as the game is very clearly all about the experience of being thrown smack into the middle of a kung fu movie, with the physics, environment, sounds and mechanics reflecting as much. The narration is easily the campiest element of the game, a male voice over delivered in the form of a stereotypically over-the-top Asian accent, and despite fitting in with the game’s semi-satirical context, it can get a little distracting at times.

The Force is strong with this one 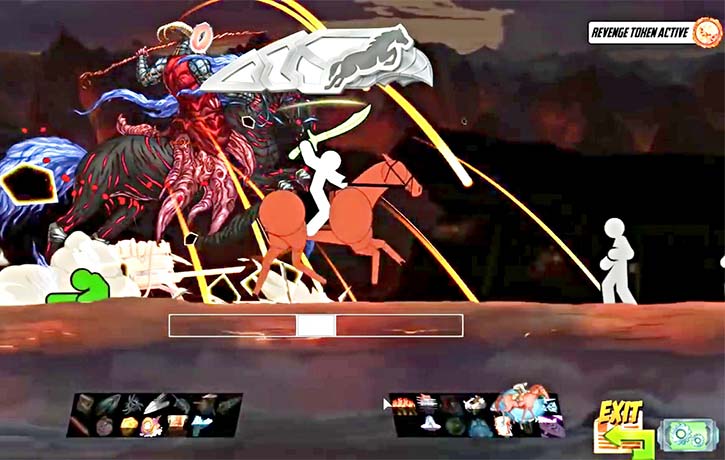 Taking out two enemies with a helicopter kick

Nevertheless, players are unlikely to care as they’re assaulted with the pixelated confetti that makes up each and every stage, and with different challenges to face on each one, there’s more than enough to test their skills and get their thrills as they progress from one set of enemies to the next.

“One Finger Death Punch 2” keeps it simple while also keeping the player on their toes, and above all else, it keeps things fun. The blast of visual and auditory insanity that injected into every second of the game will keep players coming back for more, and there’s plenty of unique added elements at each level for players to sharpen their skills with. With stage after stage of campy, self-satirizing fun, “One Finger Death Punch 2” is an absolute blast!

The opening menu of One Finger Death Punch 2

Climbing the ladder of success in One Finger Death Punch 2

Making your way through the Kung Fu Kingdom

What are your impressions of “One Finger Death Punch 2”, or its 2013 predecessor – given them a go? Which is the clear winner among your favourite kung fu fighting games? Let us know in the comments below; Like, share and join in the conversation on Facebook and follow us on Twitter & Instagram. Mash those keys and click on into a FUniverse of live action films, in-depth interviews, Top 10’s, get some cool, official KFK gifts for yourself & your family, and subscribe to our YouTube channel for more action-packed videos!