Jason Statham once again puts in a hard-hitting performance in the gritty martial-arts thriller, “Hummingbird” (released as “Redemption” in the United States). It follows the story of a homeless ex-commando who finds the possibility of a new life. It has one of the deepest, most involving plots of any of Statham’s films so far…

Jason Statham plays the lead as the haunted Special Forces veteran Joseph Smith / Joey Jones, opposite love interest Cristina (Agata Buzek). The main villain of the story, a murderous banker by the name of Max Forrester is carried off by Christian Brassington, whilst gangster Mr Choy is handled by Benedict Wong. In a smaller role is Joey’s estranged wife, Dawn, played by the always excellent Vicky McClure of “This is England” and the BBC TV series, “Line of Duty”.

On the run from a military tribunal due to his misconduct in Afghanistan, Special Forces soldier Joey (Jason Statham) has fallen on hard times. When we first see him, he is a shadow of his former self, out of his head on drugs and alcohol and homeless somewhere in central London.

Im going to kill you with this spoon

Joey as we first meet him

One night, whilst being chased by a pair of vicious thugs that prey on the homeless, he accidentally falls through the skylight into the flat of a successful photographer. He decides to stay there and use his resources to rebuild his life.

Conflicts between Joeys past and present

Joey faces off against thugs

However, with the clock ticking until the photographer’s return, and his past catching up with him, it becomes clear that Joey’s new life cannot last long.

Although this is overall a more thoughtful character-led piece, there are also several great action scenes for fight fans to relish.

Joey is a fearsome enforcer

A classic example of a peace-seeking warrior fending off troublemakers, it starts off with some drunken football supporters being asked to leave by Joey, who now works in the kitchen of a Chinese restaurant. It quickly turns nasty – but Joey easily dispatches them, with quick, precise movements – an arm lock, punch to the throat and a groin kick later – job done, in style. 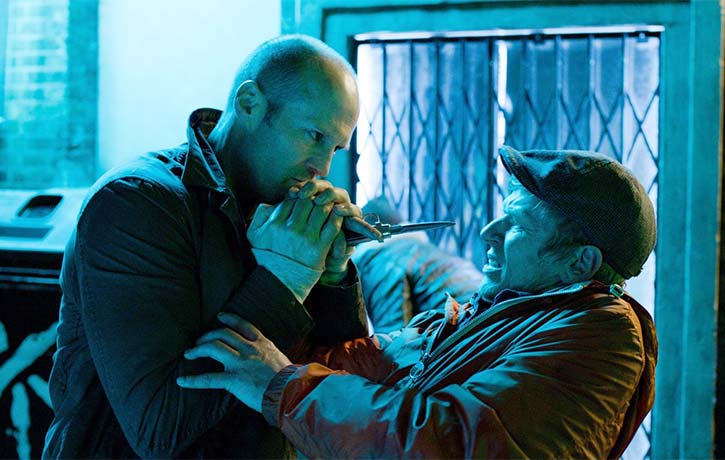 Joey turns the tables on his tormentors

A satisfying scene, where Joey, now back in fighting shape teaches a lesson to the two thugs who prey on the homeless. This time Joey isn’t holding back, breaking bones and kicking a downed opponent in the head. It includes my favourite line from the film – “I’m going to kill you with this spoon.”

Joey, now working for a Chinese gangster, faces off against a rival pimp. His bodyguard goes to pull a machete, but Joey takes him out with a lightning fast punch.

Bad move…pulling a weapon on a commando

A brutal scene where Joey is sent to collect money from a family – run restaurant. This time, keeping with in with the more complex theme of the film, Joey loses it here and doesn’t play the good guy…watch it and see.

Enforcer pulls a machete on Joey

The most engaging thing about “Hummingbird” is the depth of the story, with Statham playing a decidedly complex character in Joey. Joey is by turns a hero and a bad guy, sometimes sympathetic and then very self-centred. In the special features section of the DVD Statham highlights this, that he is not your typical, regular hero.

Joey’s past is of a soldier on the run because of a war crime, he is not a hero rather than an angry, pessimistic man trying his best to do the right thing and and find redemption.

Joey uses a money tin as a knuckleduster

Joey begins work as an enforcer

If you’re a pure action fan, there’s much for you to really get into and enjoy here. The fight scenes are well choreographed, and up to Statham’s usual sharp, crisp high standards.

For fight fans and Statham fans this film is definitely a must watch delivering a mix of kick ass martial-arts action alongside an almost refreshingly complex story.

Do you remember “Hummingbird” (aka “Redemption”) from 7 years back? Do you think it’s underrated? Check it out if you haven’t already via Amazon! What are your favourite fight moments from the Stath?

If you’re a soldier or a war vet, we think martial arts can help you overcome PTSD and other mental issues. So channel your emotional energy through to the FUniverse and check out these Top 5’s, Top 10 Jason Statham Movie Fights, special interviews, wear your Zen in Official KFK gear and subscribe for more Redemptive fight action on YouTube!