An entertaining film that features typical Hong Kong cinema; plenty of comedy and a visual feast of aerial martial arts held together with a murder-mystery thriller plot and an amiable cast including the legendary Jet Li.

Although he receives top billing on the DVD cover, Jet Li is cast as a supporting role to Zhang Wen, in the buddy-cop roles of seasoned veteran and young detective respectively. Li as veteran Hong Detective Huang Fei Hong exudes charisma and comic delivery as easily as he executes his airbourne spin kicks.

Zhang Wen seems to revel in his role as the arrogant detective Wang Bu Er and is the star of the film. His likeable, cheeky charm as well as energetic martial arts skills make Wen an entertaining and watchable performer.

Balancing out the testosterone is Michelle Chan as the detectives’ long suffering commanding officer. Chan shows she is adept at comedy with great timing and straight-faced delivery. Shishi Liu and Yan Liu turn up the temperature as potential love interests and murder suspects.

The Smile Murderer has claimed four victims and it’s up to Hong Kong detectives Huang Fei Hong (Jet Li) and Wang Bu Er (Zhang Wen) to catch the killer. The only suspects are actress Liu Jinshuo (Shishi Liu) and her sister Dai Yiyi (Yan Liu). Under pressure to appease public worries, the two detectives have to put their differences aside and work together before the killer strikes again.

Zhang Wen to the rescue

Wen shows what hes made of

Through the looking glass 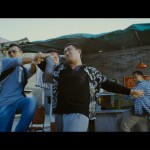 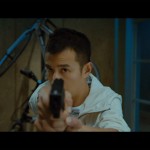 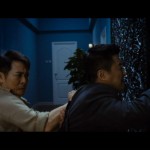 As the film’s stunt co-ordinator, Corey Yuen (No Retreat, No Surrender) has staged some elaborate and entertaining action sequences. Yuen puts the actors and stuntmen through their paces combining fast paced choreography with smooth wire work. First time director Tsz Ming Wong captures all the exhilarating fun of acrobatic martial arts and outlandish chases including one involving Zhang Wen chasing a suspect on a BMX bike. Wong’s use of slow motion, and surreal background images gives the whole film an eerie kind of supernatural feel, and the stunt and fight performers some zany abilities.

Jet Li is highly watchable as ever with his usual display of wushu-esque skills. Li appears to delight in every fight scene and shows no major signs of slowing down after thirty years in the business; from aerial acrobatics down seemingly never-ending flights of stairs to the final fight on some unsteady bamboo scaffolding! Zhang Wen brings more comedy to the proceedings as in the scene where he comes to the rescue wearing a tartan skirt revealing a snug pair of briefs underneath (a la Marilyn Monroe!) yet he does show off ample acrobatic, athletic Wushu and Wing Chun abilities.

Badges of Fury has all the elements of good Hong Kong action cinema; a wacky blend of comedy with a decent volume of action held together by an engaging enough plot and some refreshing, lighthearted performances. The film has a ghostly feel making it hard to determine whether the inclusion of cloudy and shadowy manifestations make the film a supernatural tale or are simply some stylish storytelling revelations of a character’s intentions. Either way this doesn’t detract from the film’s genuine sense of fun. 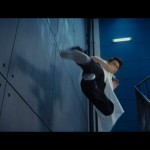 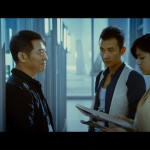 Hong Kongs finest are on the case

Deadly intentions or a spooky photobomb

Another aerial moment from Li

A flying moment from Zhang Wen

A phone call with Bruce Lee