Steven Seagal’s ninth feature film marked something of a departure from his previous work, cast as one half of a detective partnership in a buddy-cop thriller and a storyline with echoes of David Fincher’s ‘Se7en’. It wasn’t the box office success of “Under Siege” (barely recovering its estimated $45,000 budget) which is a pity as there is plenty in this action thriller to keep audiences entertained.

Seagal’s role of Detective Jack Cole, a police officer who used to be a lethal spy, is one with plenty of intrigue that includes his own Buddhist beliefs. Cole confidently struts through the film donning traditional Chinese clothing (and a particularly garish coat littered with golden dragons), and prayer beads, refusing to fight on religious grounds. Yet Cole has no qualms talking tough to the bad guys and dispensing some lethal justice.

Cole’s calmer more philosophical demeanour is the perfect contrast to Keenan Ivory Wayans’ Detective Jim Campbell. Wayans is the typical wise cracking cop who doesn’t follow rules and prefers to work alone, he shows plenty of comic timing but also proves to be a good actor and even holds his own in the action scenes.

This agent clearly doesnt know who he is insulting

Mr Smith is late for Washington

LAs finest on the job

Getting on the wrong side of Cole

Donald and Cole battle it out 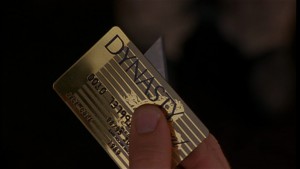 A serial killer nicknamed ‘The Family Man’ is terrorising the suburbs of Los Angeles killing entire households leaving the bodies on display in the form of Christ’s crucifixion. Detectives Jim Campbell (Wayans) and Jack Cole (Seagal) are assigned to track down the killer before he strikes again. Soon they are caught up in a series of events linked to clandestine criminal activities and business deals. Further complications arise with concerns over Cole’s mysterious past and his relationship to one of the victims making him the prime suspect.

The minimal inclusion of Aikido and various weapons-based martial arts which featured prominently in Seagal’s earlier work, is noticeable. However this does not detract from the entertaining fight action which mainly feature some fast paced and powerful Itosu-kai and Shito-Ryu Karate (as a child Seagal studied both under Sensei Fumio Demura).

Seagal barely breaks a sweat as he punches and kicks his way through an assortment of Russian mobsters and CIA agents with ease, stopping to utter the occasional one-liner.  The car park fight in which Seagal uses a credit card concealing a sharp blade to deadly effect is a genuine crowd pleaser, along with the restaurant scene sending CIA agents crashing through tables and glass doors. The eagerly awaited Karate battle between Cole and Donald, does not disappoint with every strike and kick swiftly executed with bone-crunching accuracy.

Wayans also gets to flex his action muscles and it is evident that he has benefitted from some training with Seagal. Wayans is highly watchable as the tough talking and hitting Detective Campbell skillfully wielding his feet and fists as effectively as his firearm battling Russian heavies alongside Cole, as well as trading punches with a masked Donald.

“The Glimmer Man” is an enjoyable action thriller, a promising debut from writer Kevin Brodbin and held together effectively by television director John Gray. There is great chemistry between Seagal and Wayans who clearly enjoyed their roles, the story is engaging and the action on the whole is well paced and entertaining. It could have benefitted from a longer running time for more character development and more action but still, it’s a highly watchable, solid thriller.

Cole is caught by surprise

Campbell is not impressed with Coles chess story

Campbell is already regretting this partnership

Campbell considers his partner might have a darker side