Making it a little more challenging!

The martial arts world is filled with legends of men and women whose training has granted them abilities that border on superhuman. Ron Smoorenburg casually stands in a full-split with one leg perpendicular to the ground. Shi Yan Ming turns Bruce Lee’s famed one-inch-punch into a killing strike more deadly than a 35 mph car crash. And, of course, Micky Gooch performs dozens of pushups on his index finger like it was nothing at all.

A native of the U.K., Gooch took up Kyokushin Karate after being inspired by Bruce Lee’s “Enter the Dragon“. He began his competitive career in knockdown karate in 1975, but gained an ever increasing level of fame in the martial arts world for his demonstrations of breaking techniques and one-finger push-ups!

Gooch left audiences spellbound with his ability to shatter coconuts and watermelons with his bare hands, and their amazement only grew with the sight of his one-finger push-ups.

Never one to simply meet expectations when he could exceed them, Gooch wowed the audience present by pulling off thirty-eight! That demonstration soon led to Gooch becoming a frequent television presence, demonstrating his amazing abilities on shows such as “Blue Peter” and “Just Amazing”, the only martial artist alongside people demonstrating feats more commonly associated with circus performers.

Gooch would also demonstrate his one-finger push-ups at charity functions, raising thousands of pounds from audiences eager to see him break his own record again and again, which he always did.

Micky Gooch embodies the unification of mind, body, and spirit that all martial artists seek to achieve. The abilities that he has demonstrated throughout his life are proof positive of the ultimate secret to achieving the highest possible potential in martial arts – that there is no secret, just hard work, dedication, and a never surrender attitude!

Making it a little more challenging!

Mickey Gooch being accepted into Ripley’s Believe it or Not! 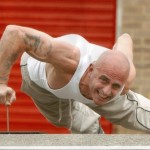 Maintaining the old one-finger push up!