It’s already been five years since Marvel’s mega-budget superhero crossover “The Avengers” ushered in the next era of superhero cinema, yet it still feels like it was yesterday. As the MCU gears up to repeat that magic once more with their Netflix event series “The Defenders”, the penultimate chapter of their street level saga arrives in the form of “Iron Fist”. Based on the acclaimed comic book inspired by the 1970’s kung fu craze, “Iron Fist” is an uneven but modest success with enough avoidable flaws to frown upon, but enough virtues to ultimately recommend.

Finn Jones steps into the role of billionaire martial artist Danny Rand, long presumed dead until he literally wanders back into New York City to the consternation of the high-rollers now running his father’s company. He’s joined by his fellow “Game of Thrones” alumni Jessica Henwick in the role of Colleen Wing, a martial arts instructor with a Samurai’s mindset who becomes Danny’s closest ally in reclaiming his old life. David Wenham portrays the sinister Harold Meachum, a vicious, shadowy manipulator, while Tom Pelphrey and Jessica Stroup portray his business-saavy children, Harold and Joy. Ramon Rodriguez takes on the role of Colleen’s mentor Bakuto, with Sacha Dhawan taking on the role of Danny’s close friend and fellow kung fu master, Davos, and Rosario Dawson, a regular of Marvel’s Netflixverse, drops in once more as Claire Temple, a nurse with a predilection for treating wounded superheroes.

Fifteen years ago, billionaire tycoon Wendell Rand disappeared with his wife Heather and ten-year-old son Danny during an excursion to the mountains of Tibet and have long been presumed dead. That is, until Danny suddenly re-appears in his New York City, hoping to reconnect with his childhood friends, Ward and Joy Meachum, who now run Rand Enterprises. 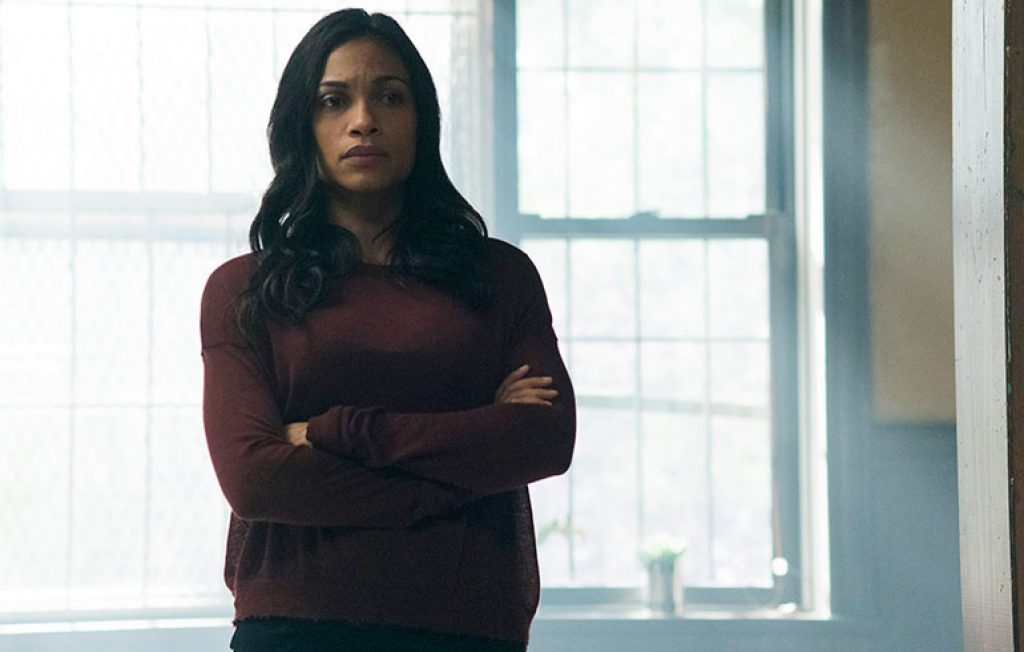 Claire Temple has been running into a lot of superheroes lately

While Wendell and Heather both perished when their plane crashed, Danny survived and was taken in by emissaries of the mystical city of K’un Lun. During his time in the extra-dimensional city, Danny became a Buddhist monk and a kung fu master and after defeating the fearsome dragon Shou Lao the Undying, gained the power of the “Iron Fist”, allowing him to focus his chi into his fist, making it as strong as iron. Danny quickly gains an enemy in the form of Ward and Joy’s father Harold, who wants Danny taken out of the picture to maintain control of Rand Enterprises, and who happens to be in league with the ninja cult known as The Hand, whom the Iron Fist had sworn to defeat.

As the last of Netflix’s Marvel shows before their much-anticipated crossover “The Defenders”, “Iron Fist” arrives with a well-laid foundation set in place by its predecessors. “Jessica Jones”, “Luke Cage”, and seasons one and two of “Daredevil” each delivered in the upper one percentile of the standards set by the Marvel Cinematic Universe, and quite arguably rank as among the best material the MCU has had to offer. “Daredevil” especially hit all the right marks with nary a hiccup along the way. Unfortunately, Marvel and Netflix’s winning streak hits its first series of stumbles with “Iron Fist”, a show that oscillates from good to great in its best moments while being dragged down by every point of negativity its three predecessors tactfully avoided. 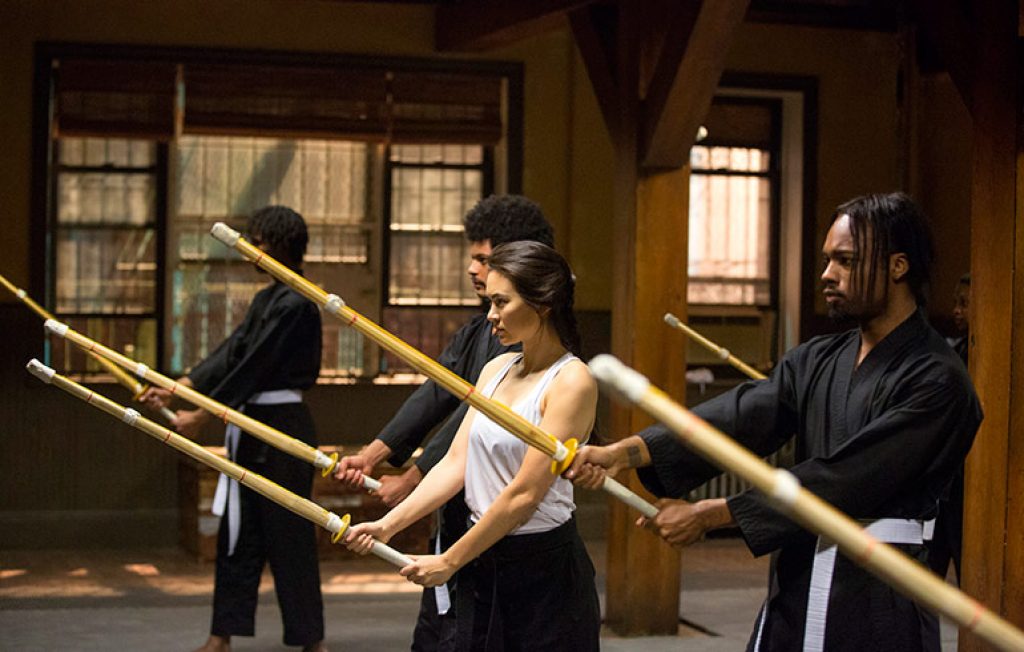 Colleen takes her students through the basics of Kenjutsu

Finn Jones is fantastic as Danny Rand, a young man interpreting the world around him through the eyes of a child a la Aang of “Avatar: The Last Airbender”. His is certainly among the most unique performances in superhero cinema and is well-complimented by Danny’s dual personalities as “The Monk” and “The Warrior”, and by itself would be enough to earn the series a recommendation for that novelty alone. Unfortunately, too often, the viewer is pulled away from Danny’s story for tedious and uninteresting scenes in the boardroom of Rand Enterprises and squabbles among the Meachums that become more and more clear in how extraneous they are to the meat and potatoes of the series as the season progresses. Harold’s connections to The Hand keep the story on track whenever the attention is refocused in his direction, but the show often seems to be battling with itself over budgeting the right amount of its time to boardroom meetings and corporate espionage, as if these are the narrative equivalent of the legal drama in “Daredevil”, which they decidedly aren’t.

When the series does keep things focused in the right direction, the action is something of a mixed bag. Colleen, against her Bushido-guided principles, snags several of the better fight sequences in the series by stepping into some underground MMA fights, as well as during a sword fight in the slashing rain later in the show. Jessica Henwick is easily the breakout supporting character on the show and perhaps of all of Marvel’s Netflix series (there are currently calls online for a “Daughters of the Dragon” spin-off featuring her and Misty Knight of “Luke Cage” that should absolutely be heeded. 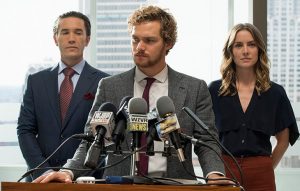 Danny turns to Claire for help

Rand International has fallen into the wrong hands

Danny nurses a wound from his last fight

Danny Rand returns from Kun Lun as a Living Weapon

The kung fu Danny delivers is surprisingly emblematic of the show overall. His first major skirmish at the end of episode one with a cadre of hired assassins gets things off to a promising start, with Danny twirling around delivering butterfly kicks and impressive aerial maneuvers. Episodes six and eight deliver some of the strongest action, with Danny having to hold his own in an underground kung fu tournament in the former and squaring off with the villainous master of Drunken Fist Zhou Cheng, played by Lewis Tan, in the latter.

Unfortunately, too often the pacing of the series dictates that we go back to the boardroom of Rand Enterprises for more corporate in-fighting amid other distractions. And when the spotlight does return in Danny and Colleen’s direction, it becomes clear as the series progresses that the action is often too grounded and mundane; Danny’s scuffle with a foe inside of a moving truck being a prime example. This is actually a show that would have benefited significantly from wire-fu, especially in the aim of more strongly distinguishing its action from “Daredevil”.

The arrival of Danny’s friend from K’un Lun, Davos (whom Iron Fist fans know as his arch-enemy Steel Serpent) kicks things back into high gear. The series seems to have found its groove as Danny and Davos fight off a swarm of Hand ninjas, and the groundwork for their eventual enmity is well-placed with Davos growing increasingly frustrated with Danny, enough for them to finally have it out in the single best one-on-one match in the season. However, as this comes in the twelfth episode, this also serves to highlight the weaker points of the series, given that the final episode is lacking in both impact (aside from a very explosive use of the Iron Fist on Danny’s part) and a sense of finality. Really the two episodes should have switched places, although the cliffhanger that concludes the season comes close to making up for the misplacement of the two episodes. 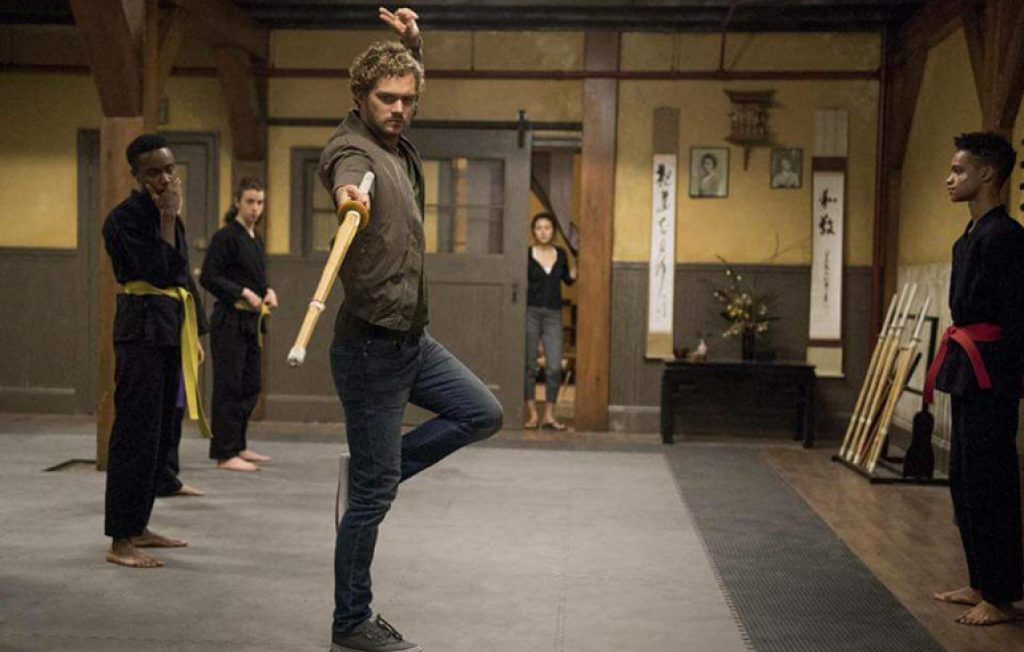 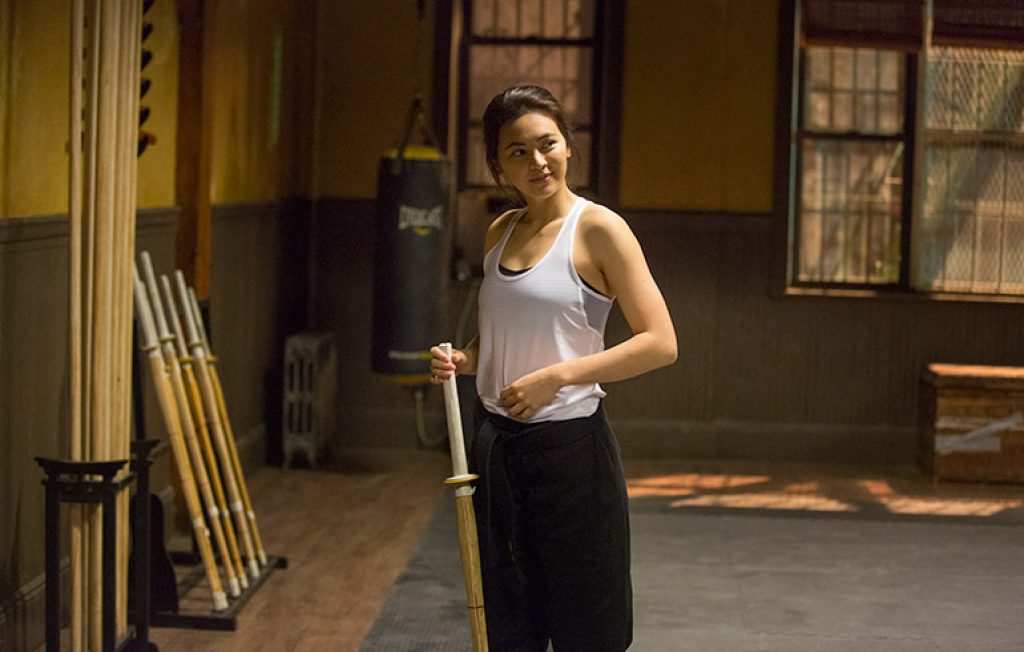 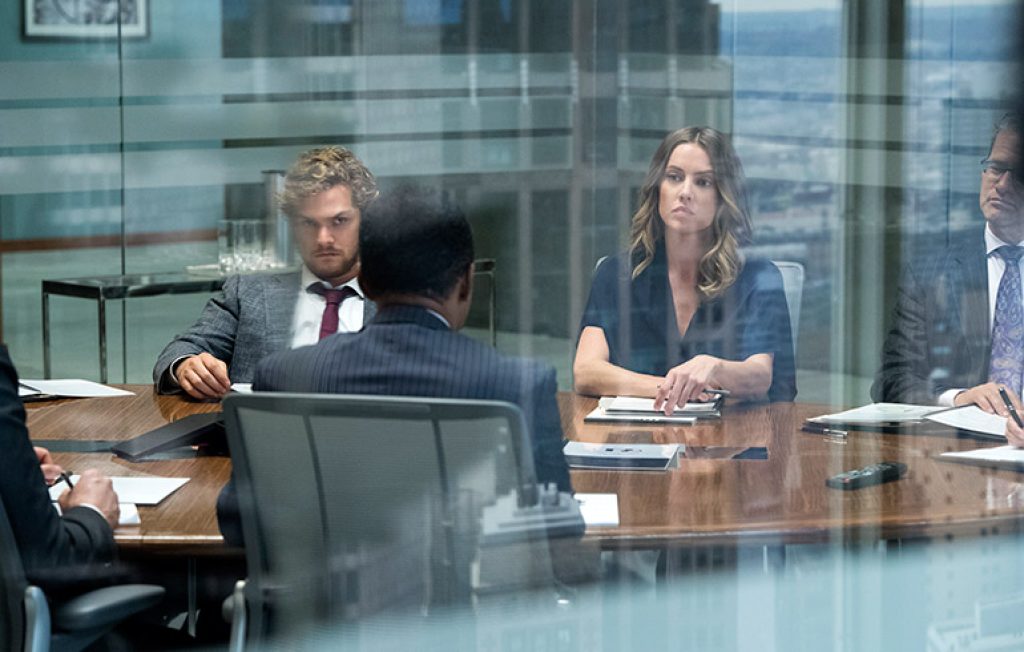 “Iron Fist” is not a bad series. It runs the full spectrum of quality throughout its thirteen episodes and emerges as a decent kung fu-driven superhero show that could have been a great one, and has just enough strong points for MCU fans to want to give it a look. Finn Jones and Jessica Henwick are never less than excellent as Danny and Colleen, and every use of the Iron Fist itself is exceptionally well-handled (Danny’s first time putting it to use is a true “First flight of Superman” moment). Although weighed-down by unengaging sub-plots of corporate chicanery and the oscillating quality of its fight sequences, I suspect these weaker points are mere speed bumps on the highway to the next superhero crossover event. Hopefully, the strongest moments of “Iron Fist” are a harbinger that The Immortal Weapon of K’un Lun will emerge in all his glory when the time comes for “The Defenders” to assemble. 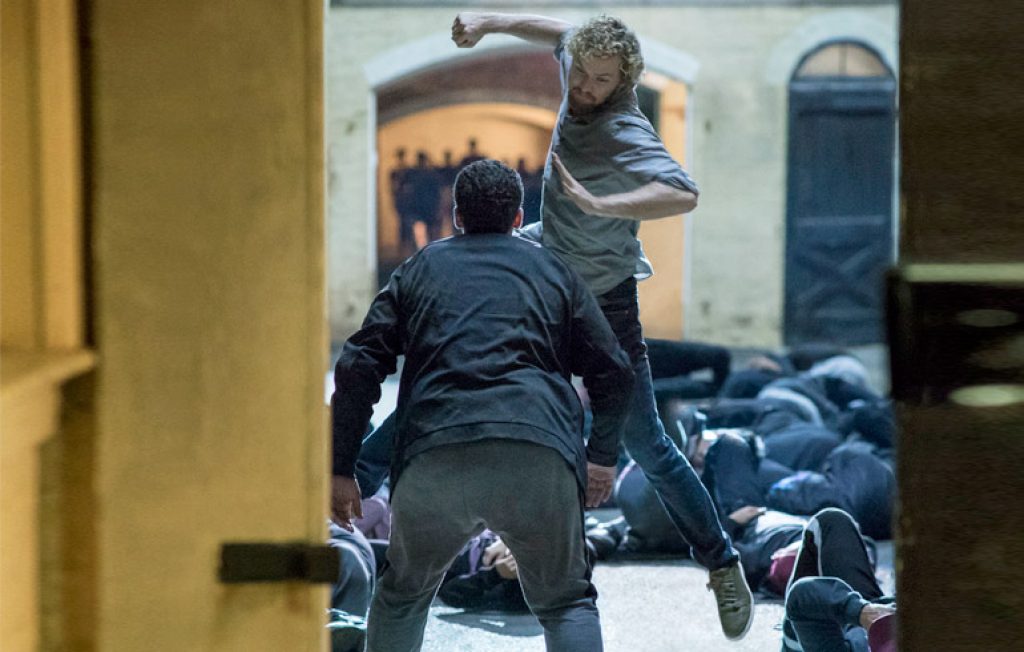 Danny emerged from Kun Lun as an unstoppable warrior

Colleen is a master of the katana