This book is an account of the author’s journey in martial arts, from a young age to now, and the thoughts and events that led him to taking the feared ‘Thirty Man Kumite’.

It covers the different styles Powell trained in from a child, his experiences in different training environments and the development of his mind and spirit as he works towards one of karate’s fiercest tests: 30 fighters, lined up one after another rising in grade and experience so the toughest and best fighters were faced at the end, with full contact rounds and few breaks for the fighter. 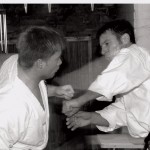 The book’s front cover and notes are potentially misleading, as you could look at it you might think it is a work of fiction, only the dragon eye showing and wild claims of a 30 man fight, however if you look a little closer you can see the words ‘ Foreword by Geoff Thompson’. This should settle those thoughts, letting you know this book is not fiction and could be a very interesting read.

“Waking Dragons” starts with a first person account of what it felt like to be part of a ‘Thirty Man Kumite’, albeit as one of the thirty, not the person undertaking one of the toughest tests in martial arts. That account is left for the end of the book as we first get to read about the journey to that goal.

Powell includes how he started his journey when he was young, beginning with judo as a child and teenager, and then moving to karate after he moved to London while studying at University. Goran also studied taekwondo and other styles of karate. He provides a detailed description of the different clubs, including his own thoughts on what his instructors taught and told him. Powell also mentions his martial studies that took place abroad, in Spain and Germany as he spent 6 months in each as part of his polytechnic course. Powell expands on job interviews and other life events to convey how he had to fit his training in where he could. During the book, he highlights instances of the effects of getting older and not being as flexible and able to shrug off injury as well as he did during youth. 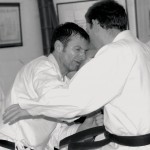 Towards the end of the book Powell turns to his upcoming ‘Thirty Man Kumite’, how he decided to do it after being part of a few previously -he then goes on to provide his training, thoughts and fears in the months leading to it. This is where the story has been leading to and it is very interesting and inspirational. Finally, there are sections on the actual test and the aftermath. To close the book Goran suggests some books to read if you wish to educate yourself to gain a deeper insight into the martial arts. I would add this book to that list, as it covers an extreme martial arts test and one person’s journey into it, as well as how to train your body and mind for competitions.

The book is a fascinating journey through one man’s experiences in martial arts, there should be something that all martial artists can relate to here. It is not an account of someone who travels to an exotic location and dedicates themselves to martial arts 24 hours a day; it is the story of the author who has to juggle growing up, education, family and work commitments, whilst adhering to martial arts long term and working towards an amazing achievement.

This book should appeal to both those who practice martial arts (not just karatekas), and those who do not, as the lessons and thoughts Powell articulates are applicable to many situations and events.

As stated in the review, I think this book should be on the ‘to read list’ of all who wish to gain a deeper insight into martial arts. Every martial artist has a different journey and here is the path of one. When the book was released it became an instant bestseller in the Amazon Martial Arts category and the author has followed this up by writing a further three books. The star rating for this book on Amazon is very good and the reviews are justifiably excellent.

This is a great book, both stimulating and inspiring. I have read it twice and I know I will read it again!

“We learned that during a fight, you give off signals that your opponent can read. So if you’re tired, it’s important not to show it. Don’t huff and puff and look sorry for yourself. There is no need. It doesn’t help you in any way, but it will encourage your opponent to make one last effort and finish you off. Of course, it works the other way too. If you see him looking exhausted you can feel encouraged. You can gain strength from it and finish him off.”

“Soon I was learning the first kata, which translates loosely as ‘attack and smash’. Then one day, to my amazement, Chris took each move from the kata and showed us what it meant. It may sound incredible, but in over ten years of training, no one had ever done that before.”

Last 8 in Line Up

“What I saw shocked me. The level of contact was very severe. The opening fighters were hyped up. The whole association was watching and they didn’t want to look soft. They were hitting with real intent. The sound of each kick and punch echoed around the dojo’s high ceiling with a sharp crack.”

“All you need is the determination to keep training hard enough, for long enough. Nothing more. As Sensei Gavin likes to say: ‘The secret of training is training’.”