THE FATE OF LEE KHAN is an essential work from master craftsman King Hu, one of the most influential Asian movie directors of all time! Eureka Entertainment are releasing the action-packed wuxia classic as part of The Masters of Cinema Series in a definitive Dual Format (Blu-ray & DVD) edition for the first time in the UK on 21st October 2019. The first print-run of 2000 copies will feature a Limited Edition O-Card Slipcase.

The final film in King Hu’s “Inn Trilogy”, and the follow-up to his highly-acclaimed A Touch of Zen, The Fate of Lee Khan once again shows the master filmmaker’s impeccable talent in creating drama out of a single setting.

An espionage thriller with a unique wuxia twist and shades of Kurosawa’s Seven Samurai, the film chronicles a tense showdown between warriors on opposing sides of a civil war in a rural inn.

When Lee Khan (Tien Feng; A Better Tomorrow, Fist of Fury), a dangerous and cunning Mongol official, and his equally deadly sister Lee Wan-erh (Hsu Feng; A Touch of Zen), arrive at the Spring Inn to obtain a battle map that reveals the location of the Chinese rebel army, a group of resistance fighters, including an all-female group of ex-convicts plan to recapture the map, whatever the cost.

As much a pre-cursor to the ‘hangout’ movie as it is an action-packed wuxia adventure, “The Fate of Lee Khan” features action choreography by Sammo Hung (Eastern Condors) and also stars the incredible Angela “Lady Whirlwind” Mao.

Lee Khan is a deadly swordsman 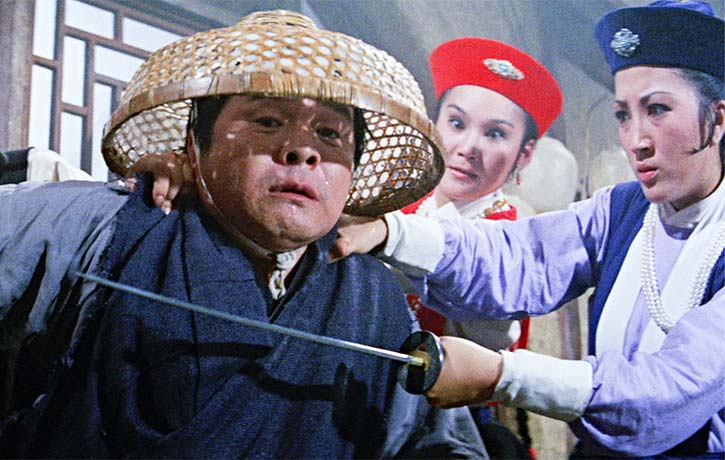 This release is absolutely a must-have edition for all martial arts and kung fu movie aficionados and fans!

Lucky Kung Fu Kingdom readers can get their copy for FREE courtesy of our friends at Eureka Entertainment BUT DO HURRY, COMPETITION ENDS SUNDAY 3RD NOVEMBER 2019!

All you need to do to be in with a chance of winning is “LIKE” the KUNG FU KINGDOM FACEBOOK PAGE, “SHARE” THE FATE OF LEE KHAN COMPETITION POST and WRITE IN THE POST’S COMMENTS section, your answer to the following simple question:

Winners will be notified via Facebook message by 23:59GMT/BST Monday 4th November 2019.

“The Fate of Lee Khan” can be ordered now on Blu-ray and releases 21st October 2019 courtesy of Eureka Video and you can also order it via Amazon.

We hope you enjoy revisiting these classics of kung-fu action cinema as much as we do. Which other old-school wuxia or martial arts movie classics do you think should get a refresh? Let us know in the comments below; Like, share and join in the conversation on Facebook and follow us on Twitter & Instagram!

Take your FATE in your own hands (and feet ) and ENTER the FUniverse of Top 5’s, Top 10’s, in-depth interviews, don your Official KFK gear like a boss, and subscribe for more FU-filling action on YouTube!