In today’s landscape of assassin movies as the big kids on the block of action films, “Nobody” stands in stark contrast to its own title. With a simultaneously committed and soft-spoken leading man performance by Bob Odenkirk, an abundance of black comedy, and marvelously visceral action scenes, the “John Wick with a 9 to 5” that is “Nobody” is tons of bat swinging, guns-blazing, show-tune singing fun!

Hutch Mansell lives an unremarkable life in the suburbs, heading off to his 9 to 5 office job every day to support his family, but his commute is interrupted by an unexpected break-in one morning.

Though Hutch at first tries to intervene, he decides against violence and lets the burglars go, leaving his son Blake, resentful.

The frustrated Hutch later manages to track the burglars down, only to spare them once more when he sees they’re a poor couple trying to support a new baby.

Hutch finally gets to release his anger when a gang boards a bus, leaving them all bruised and bloodied, not realizing that one of them is the brother of Russian crime boss, Yulian Kuznetsov.

By the same token, as Yulian comes for payback on his brother’s attack, he doesn’t know that Hutch is a former government “auditor” and a very deadly opponent himself.

Got cash to burn

Far more so than its assassin movie contemporaries “John Wick” and “Atomic Blonde”, “Nobody” is as much a black comedy as it is an action movie.

From Family Man to Action Beast

The movie pulls a frankly surprising amount of great jokes from the day-to-day grind of Hutch’s life as a family man juxtaposed against the killing machine that he’s hidden from the world, situating that contrast perfectly in every action scene. 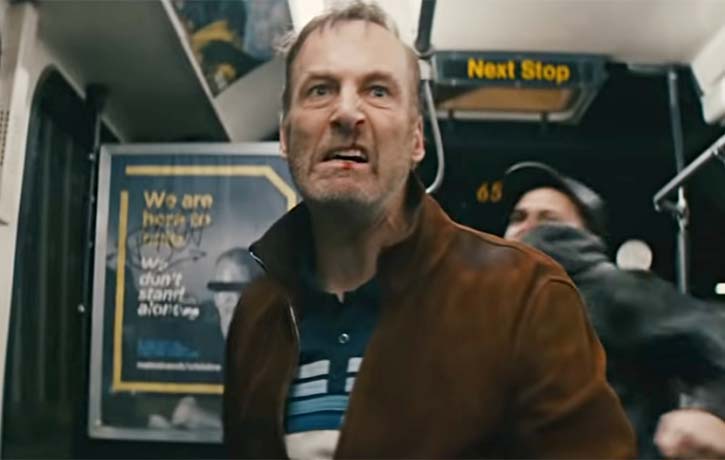 Hutch gets pushed too far

Whenever Hutch is doing his thing, the soundtrack switches to tonal opposite songs like Steve Lawrence’s “I’ve Gotta Be Me” or Louis Armstrong’s “What A Wonderful World” in glorious, ironic fashion. True to its title, Hutch leads what seems to be an unremarkable life, a man with a nice house, a decent job, a happy family with an unassuming physical build, and personality.

As we learn over the course of the movie, the idea of being “nobody” living in the suburbs is the dream Hutch has long desired, but is sadly not to be when he takes up the sword against his enemies once more.

“Nobody” naturally pulls a little humor from what Hutch wants versus what his enemies will allow him to have, two of the biggest laughs in the movie erupting right out of Hutch passing on his story to his beaten-up adversaries.

All Hell Lets Loose in the Bus Bash

If it’s the assassin movie blend of bullets and fisticuffs you’re after, you’ll get your money’s worth a-plenty with “Nobody”. While the movie takes its time setting the table of Hutch’s domestic tranquility, it explodes into action when Hutch gets rolling in the bus fight, a trainwreck of a battle that both he and the audience metaphorically and physically limp away from (watch out for Daniel Bernhardt and Alain Moussi here, too!)

Deathtraps Give “Rambo: Last Blood” a Run for its Money!

From that point on, Hutch’s pacifism seen in the opening is a distant memory. The inconspicuous husband and father standing his ground against Yulian’s attempt at retribution on his family in true Babe Ruth, bat-wielding fashion, and hitting Yulian where it hurts in his stashed-away money pit.

With the always entertaining Christopher Lloyd in the role of Hutch’s elderly father, David hops off the bench, and his half-brother Harry off the radio, to lend him a hand too, with Hutch converting his office into a maze of deathtraps to give John Rambo’s underground slaughterhouse in “Rambo: Last Blood” a run for its money.

With a sharp, acerbic sense of humor and action scenes that wow and wince in equal measure, “Nobody” is an assassin movie blast.

With a debut into the assassin movie world like this, there’s zero excuse for “Nobody 2” not to be on the soon horizon, so stay tuned!

Getting to the point

Hutch is Nobody and thats the way he likes it

Hutch takes aim with his father

Have you seen “Nobody”? What do you think of Bob Odenkirk’s debut as an action star? What are some of your favourite assassinatrix movie moments? Let us know in the comments below, join in the conversation, share this on Facebook, and follow us on Twitter & Instagram!

NEVER UNDERESTIMATE “NOBODY”: Find out what they’ve got  up their sleeves in the FUniverse…of these Top 10’s, Top 5’s, these deep-dive interviews, train full tilt in KFK WEAR, and subscribe for more unexpected FU encounters in plain suburban sight on YouTube!