Chad McQueen plays Los Angeles police officer Sean Thompson, nicknamed “Martial Law” because of his fighting prowess. The martial arts queen herself, Cynthia Rothrock, takes on the role of undercover cop and Sean’s girlfriend, Billie Blake. Together they’re out to bring down criminal and martial arts expert, Dalton Rhoades played by the legendary David Carradine, while also trying to save Sean’s brother, Michael, played by Andy McCutcheon, from descending into the criminal underworld.

Sean Thompson and Billie Blake are romantically-involved Los Angeles cops. Sean is a uniformed officer while Billie works undercover in vice. When a dead body turns up, killed by an ancient Chinese martial arts technique, a deadly pressure point blow called “dim mak”, (death touch) Sean and Billie team up to try and find the killer. The trail leads them to the charismatic Dalton Rhoades, a local martial arts dojo owner involved in the illegal sale of guns and luxury cars.

But things get complicated when Sean’s professional life collides with his personal life and he realises that his younger brother, Michael, is being drawn to the criminal life by none other than Dalton Rhoades. It’s going to be a tall order for Sean and Billie to not only save Michael, but to also bring Rhoades to justice. However Rhoades is no ordinary foe. He’s a ruthless, high-level martial arts specialist with no compunction about using lethal techniques like dim mak and it’s going to take all of Sean and Billie’s own fighting abilities to stop him and his dangerous henchman, Wu Han.

One of the great things about the straight-to-video martial arts movies of the eighties and nineties is that they know what the viewers want and they waste no time in giving it to them. That is action.

The Fights Kick Off within 5 Minutes

“Martial Law” is no exception and less than five minutes in, bad dudes are already getting their butts handed to them and being unceremoniously smashed through store windows.

Wu Han likes what he sees

The opening sequence is reminiscent of Stallone‘s “Cobra” (1986) with the bad guys taking hostages in a store, this time a diamond jewellery shop, and only one man can go in and take care of business. In this case it’s Sean “Martial Law” Thompson and the sequence does a good job of setting up Sean as a high-level martial artist. In “Martial Law” Thompson’s style is mainly kickboxing, relying on punches and a range of kicking techniques like front kicks, roundhouse kicks, spinning back kicks and spinning hook kicks, embellished with some elbow strikes and throws.

Billie in a bar room brawl 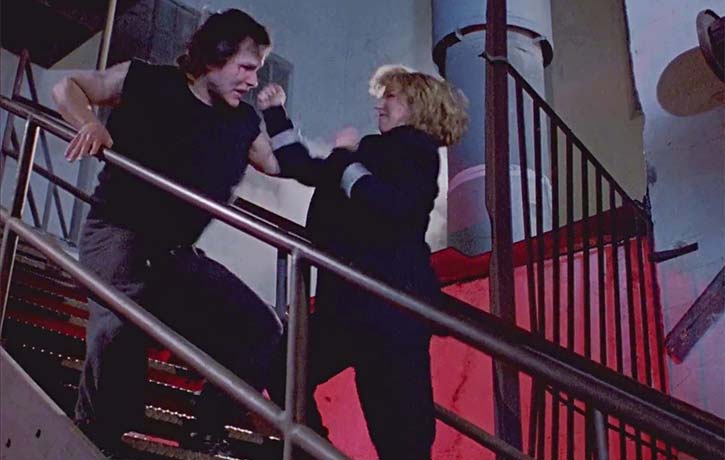 From there, the film establishes villain Dalton Rhoades’ character as somebody not to be tangled with, showing his ability with the dim mak death blow. Carradine doesn’t see too much action through the movie, just some fleeting moments establishing Rhoades’ lethality. While Rhoades is murdering using dim mak, at the same time Sean and Billie are taking on a slew of thugs in a good, old-fashioned bar brawl. We get to see Rothrock in action for the first time and of course, she’s impeccably awesome, unleashing a barrage of crisp, perfect kicks and spinning attacks.

“Martial Law” never goes for too long without a fight scene. Next up is a street melee where a fighting legend makes an appearance, and that’s none other than Benny “The Jet” Urquidez. Here he goes one-on-one with Rothrock and they trade high-level kicks back and forth in this surprise martial-arts superfight.

The movie culminates as you might expect with Sean taking on Rhoades. This fight is spliced with Billie taking on Wu Han so you get two consecutive showdowns to enjoy. To be honest, the Billie/Wu Han encounter is the better of the two. Sean vs. Rhoades is a solid back and forth clash but when it comes to true martial arts skill and athleticism, it’s clearly obvious that Cynthia Rothrock and Philip Tan are at a higher level.

Their battle is the more energetic and with a greater variety of martial arts techniques on display along with no apparent use of stunt doubles, this fight is impressively the best fight in the movie. The exciting showdown in its entirety is a satisfying way to top off an action-packed movie from the oh-so coveted eighties-cusp-of-nineties cult era of action.

“Martial Law” is a riot of a trip down memory lane to the martial arts video market of the eighties/nineties and definitely an enjoyable one.

Chad McQueen may not be a high level martial artist per se, but he does have enough skills and physicality to pull off the character of Sean Thompson even if he does rely on stunt doubles for more difficult techniques like high spinning hook kicks. Rothrock, on the other hand, is perhaps underutilised as she’s not the main character but when she does let her fists and feet fly, she dazzles as always.

Philip Tan is very memorable as the cockney Wu Han and makes a great henchman in both character and martial arts ability. And last, but certainly not least, David Carradine elevates his character of Rhoades and the movie itself with his presence and performance. All in all, this is a solid martial arts action movie with good cast and a movie worth your time, especially for Rothrock and Carradine fans.

Never bring a knife to a gunfight

Do you remember this 90’s cult action classic from 30 years ago? What are your favourite Cynthia Rothrock movie fights and which martial arts action movies have you had fun revisiting from this era? Which other female martial arts film stars do you rate and respect?

See ‘The Lady Dragon’ in “Martial Law” via Amazon!

IF YOU AGREE that Martial Law refreshes the parts that conflicting (ahem, governments and) policies cannot reach, click on into the FUniverse of these movie reviews, interviews, Cynthia ‘Lady Dragon’ Rothrock’s Top 10 fights, more Top 10’s, Top 5’s, switch your dragon ON by training in KFK gear, and subscribe for more 80’s & 90’s-driven cult fight action on YouTube!