With Wu Jing achieving milestones with hits such as “SPL 2: A Time for Consequences” and this year’s stunning action-packed “Wolf Warrior 2”, let’s not forget about some of his earlier notable works, particularly “Legendary Assassin”. Directed and choreographed by former Jackie Chan Stunt Team member Nicky Li Chung Chi, “Legendary Assassin” deserves your attention since ‘every move kills’…

Topping off the cast is Wu Jing as Bo-Tong Lam, a man who poses as a drifter, which is actually a facade behind his true identity of a lethal assassin. Making her film debut is Celina Jade (the daughter of kung fu star Roy Horan from “Snake in Eagle’s Shadow” and “Game of Death 2”) as police officer and Bo’s love interest, Hiu Wor. (‘Holly’) Kou Zhan Wen is crime boss Timothy Ma. Noriko Aoyama portrays Ma’s wife, antagonist Miho Sasaki. Lam Suet is Fat Wing, Sasaki’s underwing who leads Ma’s gang in finding Bo. As for our lineup of cops, we have veteran actor Hui Shiu-hung as captain Grant Gong, Sammy Leung as Tarzan, an arrogant police officer who has a crush on Hiu Wor but holds a grudge against Bo, and singer Alex Fong Lik-sun as pretty boy Handson. Kara Hui Ying and Ronald Cheng also make cameo appearances as a restaurant owner and noodle house owner respectively. Bo steps up to the challenge 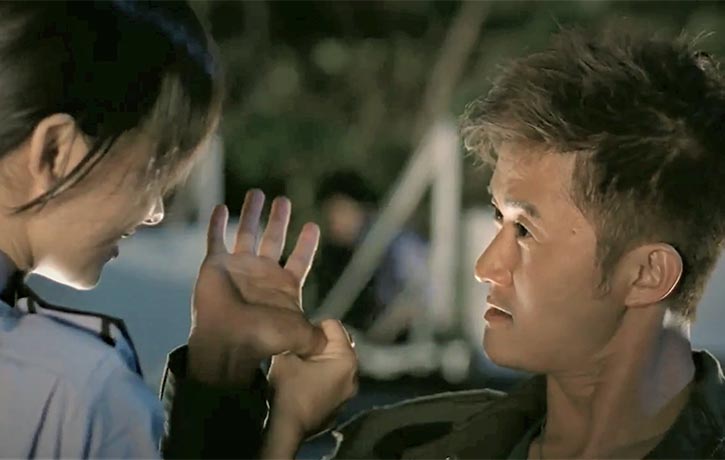 Policewoman Hiu Wor befriends Bo-Tong Lam, a mild-mannered drifter and tourist, who is actually an assassin on the run from a gang after killing and beheading the gang’s leader Timothy Ma. Although Bo manages to form a good relationship with Holly and most of her co-workers in the police force, trouble yet pursues him. Ma’s widow, Miho Sasaki, will stop at nothing to find Timothy Ma’s missing head and exact her revenge on Bo, and by extension putting Hiu Wor and her colleagues in grave danger. Credited as a former prominent member of the Jackie Chan Stunt Team (JCST) and action choreographer for hits like “Rush Hour” (1 and 2), “SPL 2”/”Kill Zone 2”, “Fatal Contact”, “Invisible Target”, “Rob-B-Hood”, and “Shaolin”, Nicky Li delivers quality action to equip Wu Jing with the smarts and skills of a legendary assassin.

The film kick-starts with an epic duel between our vigilante protagonist and an aggressive, spear-wielding Ma. Not only does this opener set up the course of events to come,it also caters to delight action film aficionados as Bo combines bone-crunching strikes with unmistakable grace and flair thanks to his wushu background. Ma swings his spear with a sharpness that will make fans cringe in fear and raise eyebrows in equal measure! 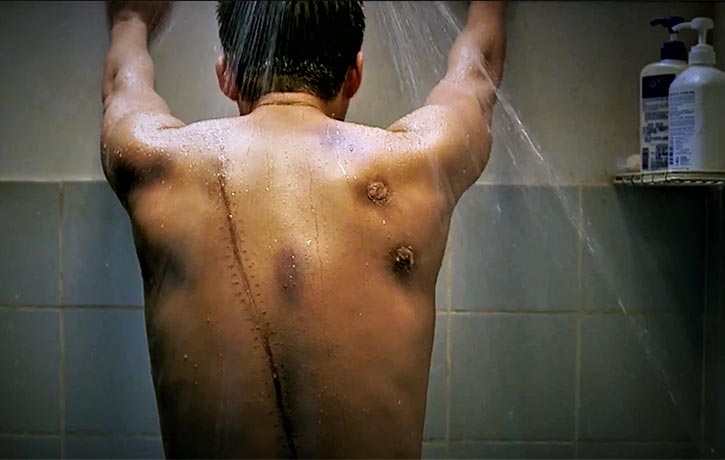 The battle scars tell all Twenty-minutes in, we have our second fight, which pits Wu Jing and Celina Jade against a trio of thieves led by legendary super kicker Ken Lo (who you may recall from “Drunken Master 2”). It starts with a bang as Wu charges at a thief with a flying double-kick only to be countered by Ken Lo’s side kick. Wu then pits his smarts and skills against the immense strength of the giant Jiang Baocheng. Although Jiang’s hulking size and power poses somewhat of a problem for our legendary assassin, Wu takes advantage of the big guy’s apparent dim – wittedness and proves that brute force alone is not enough.

Aside from his wushu skills, Wu Jing seems to have drawn some influence from Tony Jaa’s films, as noted by the adoption of devastating, whiplash-causing knee strikes. As the daughter of kung fu star Roy Horan, it is no surprise that Celina Jade would also step into the martial fray, and she does show some skill. Despite Ken Lo not throwing any punches or kicks in many films like “Fatal Contact” and “Invisible Target”, he proves that he has not completely hibernated his fighting skills and manages to put up a good fight with Wu Jing here.

Wu Jing mixes it up

The remainder of the first half focuses more on character development and the relationship between Bo and love interest Hiu Wor, as noted by a scene in which they practice combat techniques on each other demonstrating more of a romantic, chilled-out vibe rather than a super serious full-on training session.

The action button engages again at the start of the second half, splitting the fight-time among Bo and the police force. It begins with Hiu Wor and Tarzan being caught in the feud between Bo and Ma’s gang. Celina kicks more butt in her role, and though not known as a martial artist himself, Sammy Leung’s brought some judo skills to the table as noted by his clean Ippon Seio Nage (shoulder throw). Even Wu Jing steps in to lend a quick hand before taking off like a ninja. While on the run, he has a couple of more brief encounters with the gang members including a rather intense battle with one of them who uses an open hand-style and more or less reminds fans of the monkey fighter played by Mak Wai-Cheung in “Legend of the Wolf”.

A fist of fury

Bo finishes with an axe kick

Dont disturb me when Im eating One fist of fury

Preparing for a sneak attack

The gang wreaks even more havoc when they storm the police station to find Ma’s body and try coercing the police with gasoline. While Celina continues to call upon her self-defense skills, Alex Fong Lik-sun surprisingly pulls out some kicks.

Just like any good movie, “Legendary Assassin” saves the best for last with its final fight. Nicky Li sure knows how to dial up the intensity here with this lengthy and epic finale, as Wu Jing fights hordes of gang members under heavy rain. Every move comes with a torrent of fury and power that will hypnotically glue viewers to their seats and popcorn box, as the hero attempts to rescue a captured Hiu Wor from the vengeful, cunning Miho.

Bo side kicks his foe Bo pays respects for a loved one

Some pain in the rain Okay, so the story may feel a bit on the lighter-toned side for a title that implies major seriousness, but regardless, Wu Jing and Nicky Li score superbly in the action stakes here. While some action time may have been assigned to the supporting cast (which probably exceed audience expectations) the film never drifts too far from Bo, the main character. The combination of solid choreography and frenetic, kinetic attacks makes every move come off fast, furious and fatal. If you’re a fan of the genre, you’ll definitely enjoy this!

Seen the movie? Let us know what you think of it or Wu Jing’s other movies below, join in the conversation on Facebook and follow us on Twitter! (Feel free to check out our previous movie reviews.)