Claimed to be based around a true story, (the 1991 novel “The Feather Men” by Sir Ranulph Fiennes), “Killer Elite” tells of a group of mercenaries blackmailed into taking on the fearsome SAS in an assassination mission that sees action race around the globe. However, they face further problems in the form of, “The Feathermen” a group of ex-SAS members whose purpose is to protect their soldiers from just this sort of threat.

The film has a top-notch cast with Jason Statham in the role of ‘Danny Bryce’, the leader of the mercenary team, Clive Owen as ‘Spike’, the leader of The Feather Men, and Hollywood legend Robert De Niro plays ‘Hunter’, Statham’s mercenary friend and kidnapped mentor. Dominic Purcell plays Davies, Aden Young portrays Meier, and The Agent is played by Adewale Akinnuoye-Agbaje.

After an assassination attempt goes badly wrong, mercenary Danny (Statham) vows to get out of the killing game for good. However, his retirement in the Australian countryside is devastatingly interrupted by news that his mentor, Hunter (De Niro), has been imprisoned by a wealthy and powerful oil Sheik – and that if his demands are not met, he will be executed.

The problems arrive when Danny visits the Sheik. He wants revenge against the men who killed his sons in a covet war in his home country of Oman. Unfortunately for Danny, these men are soldiers from the most feared Special Forces outfit in the world – the UK’s Special Air Service – the SAS.

OK lets get this show on the road

Despite the mission being called, “a one way ticket for sure” Danny decides to take the mission out of loyalty to his friend. A series of ingenious assassinations are embarked upon, each being made to look like accidents. However, things take an even more dangerous turn when an unofficial group, ‘The Feathermen” get wind of the operation and take action to stop the killers.

The film is definitely a great watch for action fans, with a good mix of hand-to-hand combat, shoot-outs, and of course, car chases.

The unarmed combat scenes are both thrilling and inventive, and it’s always interesting to see how professional soldiers fight – as opposed to the more stylised and traditional cinematic martial arts used.

For martial arts practitioners, the scene where Hunter defends against a knifeman by using his coat wrapped around his arm, is an engaging one to watch – especially if your system teaches knife defence.

A standout martial arts action scene for me is where an ex-SAS officer deals with three hooligans who vandalise his car, and shout, “what are you going to do, grandad?”. He basically wipes the floor them – great wish fulfilment for anyone who’s ever been intimidated by thugs.

The Sheik demands vengence on SAS members who killed his sons

Again, from a martial artists point of view, this scene is a fine example of real-world, street self-defence – the soldier uses punches, elbows, and a takedown followed by a stomp on the skinheads – no balletic wushu- style moves here! This is an individual who has spent his life in real combat situations and knows how to end a fight quickly and brutally.

The reason many fight and combat film fans will give this a watch is because of Jason Statham – and if you’re among them, you won’t be disappointed. He brings his usual high-standard of finessed martial arts action to the party, with solid kicks, punches and even some crisply- executed joint locks.

Theme Song: Scorpions – Rock You Like A Hurricane (Official Video)

Another great scene is where his character, Danny is tied to a chair – yet still managing to fight his way out of the situation with a sweeping kick while on the floor. It’s clear that Statham not only knows how to act the tough guy but he’s also heavily into his hardcore fight training too.

The inventive assassination attempts, where all hits must look like accidents (recall, Scott Adkins’ “Accident Man”) was also a pleasure to watch, dramatically speaking.

Although the shoot-outs, martial arts combat and car chases are all thrilling, what stands out for me are the dramatic performances. De Niro is of course always good, and Clive Owen puts in a solid performance as the leader of, “The Featherman”. Credit for best performance goes to the lead, Jason Statham. There is something about him that makes him completely believable in even the toughest of tough – guy roles. You totally believe that his character could take on the SAS in the film. 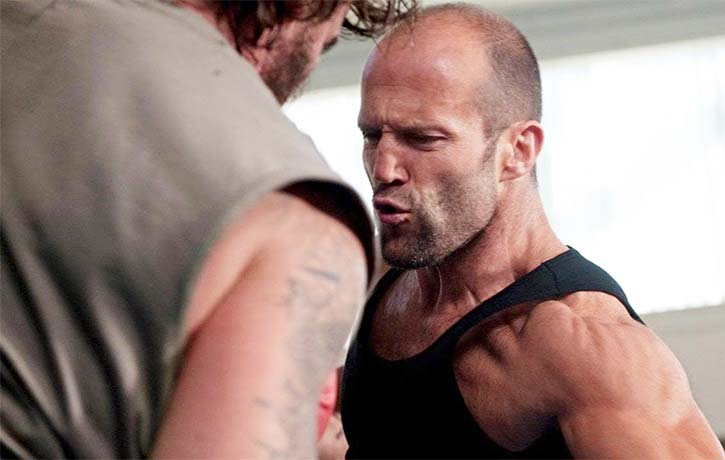 The STATH loves a good fight 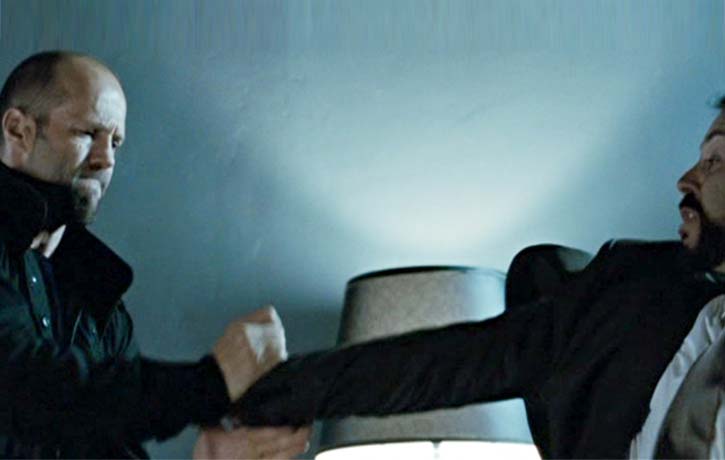 Statham gets a lock on a goon

Also noteworthy are the inventive ways his team brew and serve up hits to look like accidents. I don’t want to give away any spoilers, but the methods used certainly make it more eye-opening than other assassination flicks.

Story wise, perhaps the only problem is that it’s hard to root completely for either side – although Danny is nobly only taking the job to save his friend, he’s also dispatching Britain’s bravest of soldiers in cold blood. Maybe it was a deliberate attempt to show that in war and especially covert ops, that morality can become hazardously blurred.

That said, this is definitely worth a watch, with several spectacular bone-crunching fights to please all martial arts fans!

One of the ingenious assassination methods used

Dropping in on a friend

Spike in a meeting with the leaders of The Feathermen

The action is as inventive as it is exciting

KEEP YOUR KUNG FU INSTINCTS ON in the FUniverse: get KFK’d with these Top 10 Jason Statham Fights, deep-dive interviews, more Top 10’s, Top 5’s, look sharp in the right gear and subscribe for more hard-hitting action on YouTube!