2015 proved to be a big year for Max Zhang, following highly acclaimed appearances in “SPL 2: A Time for Consequences” and “Ip Man 3” –the latter of which led to a spin-off, “Master Z: Ip Man Legacy”, devoted to his breakout character from the film, Cheung Tin-chi. Since then, Max has continued to bring his A-game as a Wushu master and action star, with appearances in 2018’s “Pacific Rim: Uprising” and “Escape Plan: The Extractors” alongside Sylvester Stallone and Dave Bautista.

Max’s latest actioner, “Invincible Dragon”, not only calls upon him to carry the film as its protagonist, but also pits him opposite one of the legends of MMA, Anderson “The Spider” Silva. Of course, Max is always one to rise to the occasion, and the challenges of “Invincible Dragon” are far from being the first exception to that rule.

Today, Max sits down with KFK for a behind-the-scenes look at the making of “Invincible Dragon”, sharing some of his memorable moments from the film, alongside what it was like working alongside Anderson Silva to bring the film’s dynamic hero vs villain conflict to life!

Fantastic! Well, let’s start with how you became involved with “Invincible Dragon”? What interesting stories can you relate about making the film?

Well, “Invincible Dragon” has the same producer as “Master Z: Ip Man Legacy”, and they reached out to me for this project. I also have a good relationship with director Fruit Chan, so that was how I came aboard the film. As far as interesting stories, well, it was kind of a funny experience in the final showdown when Anderson and I had to fight topless. That was a first for me, to grapple another full-grown man without a shirt on! (Laughs) 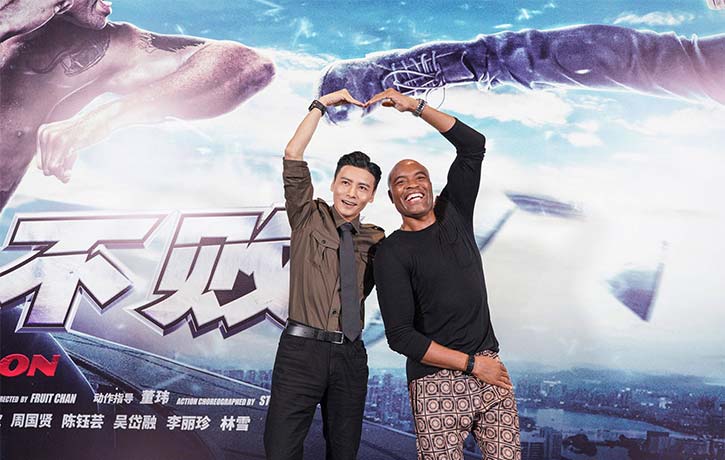 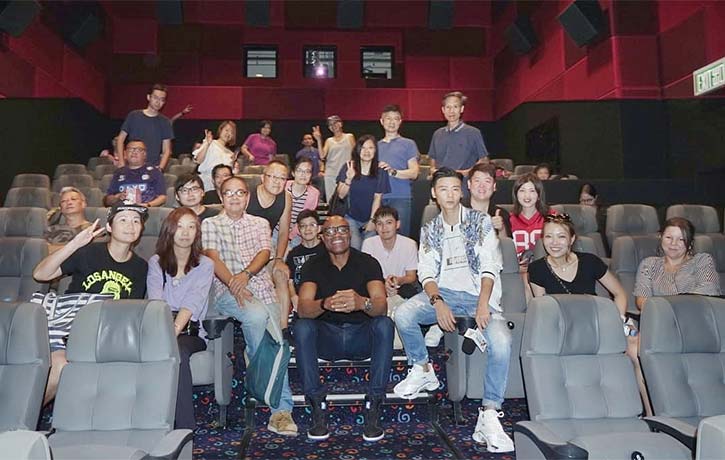 Max joins Anderson Silva for a showing of Invincible Dragon

Sounds fun! So, what would you say were some of the most memorable experiences of making “Invincible Dragon”?

My character’s dragon tattoo in the film was certainly really memorable. Whenever there were scenes that would be exposing the tattoo, it’d take a really long time to apply it onto my body. And after filming, it’d take almost two hours to remove as well. So, that was kind of an arduous process.

Artistic commitment! So, how would you say the experience of making “Invincible Dragon” compares to other films you’ve done?

I would say the biggest difference for me was just in the role itself, I think. I hadn’t tried portraying someone quite like Kowloon before, so that was different from other films I’ve done in the past. Playing such a different character with very unique traits was also a big part of what motivated me to do the film..

Expanding your horizons! So, what would you say were some of the most physically challenging stunts or fights on the film?

Actually, there were two kinds of challenges in making this movie; dramatic performance and physical performance. Director Chan wanted me to try something different with Kowloon than I’d ever done before, so drama-wise, the challenge was how to present Kowloon in a distinct way compared to all my previous roles.

Action-wise, the biggest task for me was the final fight on top of the Macau Tower. I personally am not a fan of heights, high places or tall buildings, so filming the climactic fight of the film that high up was very challenging for me.

Sounds like “Invincible Dragon” really took you out of your comfort zone, literally and figuratively. On that note, what can you share about the experience of working alongside one of the legends of MMA, Anderson “The Spider” Silva, in his role as villain, Alexander Sinclair?

It was such an honor to work with Anderson! I used to watch his MMA fights before making this film, and he truly is a legend. I was so happy that he joined the movie, and a lot of our action choreography was based around his MMA skills.

Anderson is a super nice guy, very different from how he is shown in the ring (Laughs). We both have kids, so we spent a lot of our down time on the set talking about family life, and we’ve been good friends since making this movie. “Invincible Dragon” was also Anderson’s first time in a big action film, so I shared a lot of my experiences of making action movies with him while on set, and we really bonded over that.

So great to hear about this synergy of different fighters from the planet’s far corners – indeed Anderson’s a true MMA great! How did your fight sequences in the film with Anderson go?

Well Anderson, as mentioned, new to doing action films, was hesitant to hit me when we first started fighting. He didn’t want to hurt a friend, you know. But the director would encourage him to strike harder, saying that we want it to be more realistic, so Anderson really brought his game, and we both gave it everything we had in our fights.

Awesome. As a fun aside, had you and Anderson maybe thought of having a friendly sparring match?

I think as fathers of several children, we should set a good example. Don’t go around fighting with people! (Laughs) 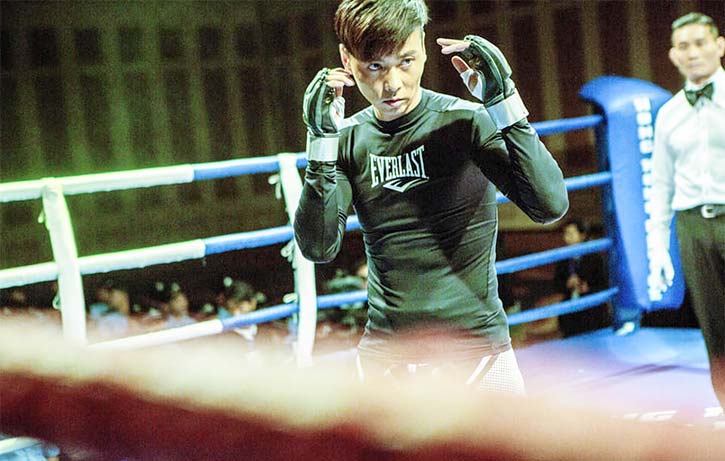 Max steps into a tense MMA fight in Invincible Dragon

Max faces off with JuJu Chan in Invincible Dragon

Preach! Were there any injuries or mishaps in the making of “Invincible Dragon”?

Well, it’s kind of the norm to get hurt making action films, and this was no exception. There was a sequence when I rolled to the edge of the Macau Tower and they had released too much wire, so I ended up rolling off the ledge. The wire got caught on my leg and I got a nasty scrape. But I was relieved that the wire wasn’t caught around my neck or anything. Otherwise, I’d have to bid my wife goodbye.

Another surprise injury was when I jumped onto a staircase and I overshot it slamming into the top. I lost balance and fell onto the steps and my spine swelled up. Fortunately, we got my back X-rayed and I came back from it okay. It’s definitely common to get hurt filming action scenes, but fortunately, it wasn’t anything too serious this time!

Glad to hear that. Well, as we get ready to sign off Max, what would you say was your favorite action scene in the film?

I actually have two favorites— one was fighting in the light rail with JuJu Chan. It’s very different when you’re fighting against a female opponent, but it’s also prettier as it adds a certain dancing flair to it. While we were filming, the light rail had also tumbled around, so that made it a little more difficult, but it turned out really well, I think. 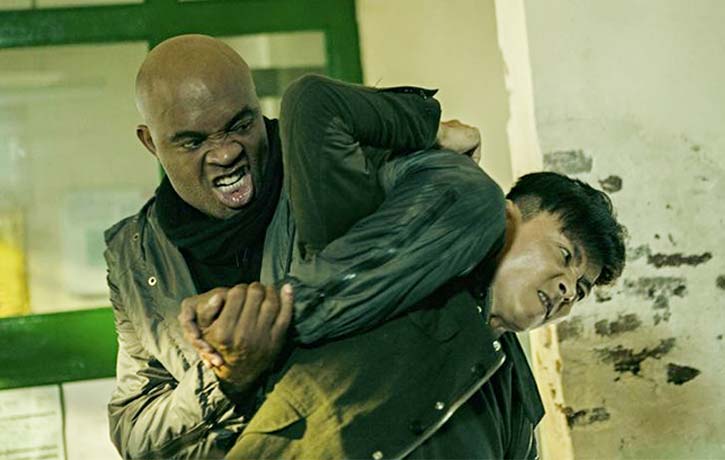 Max brings the thunder opposite Anderson Silva in Invincible Dragon 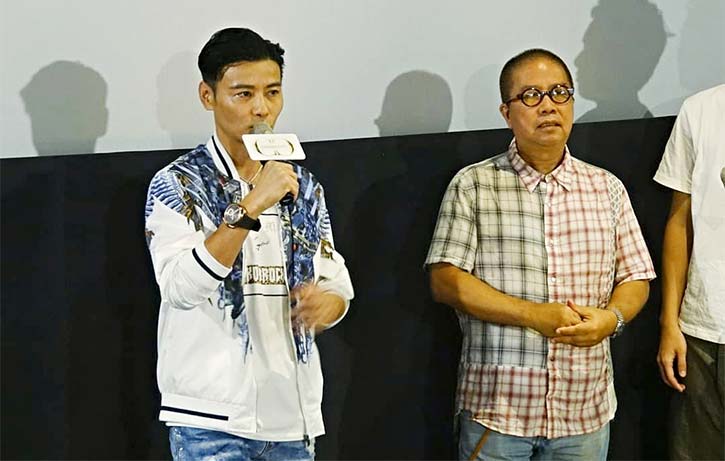 My other favorite was with Anderson, of course. Specifically, when we fought from inside the gym to outside on the Macau Tower. I personally liked that scene because it combined the mystical elements of the movie with MMA. On top of that, Kowloon has kind of gone rogue at that point, so all in all it was very interesting to see the mindset his character had gotten in at that point while fighting against Anderson.

Sounds pretty intense and definitely keen to see it. Thank you so much for the privilege of this interview today, Max. It’s been a true pleasure speaking to you again. We look forward to seeing you and Anderson in “Invincible Dragon”, and we wish you all the best of success with the film’s release in the English-speaking world as well as all the upcoming action projects for 2019 that you have coming up.

Thank you Brad, my pleasure to speak with Kung Fu Kingdom again today! 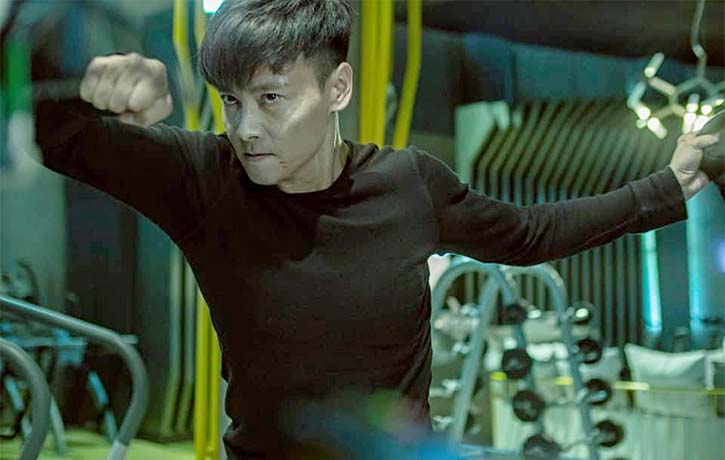 Max gets ready to show his new character in Invincible Dragon 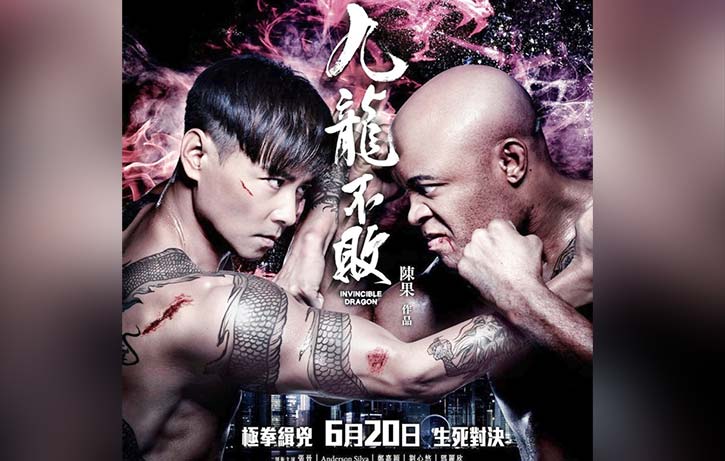 Coming soon to a theater near you

Invincible Dragon” is currently showing in theaters in China and Hong Kong, stay tuned for more info on the film’s release in the English-speaking world coming soon…Excited for “Invincible Dragon”? What other MMA fighters would you like to see battling with it out Hong Kong action stars? Let us know in the comments below; Like, share and join in the conversation with us on Facebook and follow us on Twitter & Instagram.

WANT MORE MARTIAL ARTS & MMA? Then jump in and grapple with the FUniverse of Top 10’s, our previous interview with Max Zhang, Dragon pose in Official KFK gear and subscribe for more kinetic-fanatic action on KFK YouTube!