Throw a pocketful of change in any general direction these days, and the odds are at least fifty-fifty that you’ll hit the poster for an upcoming superhero movie. Of course, chances are that it’ll depicted some costumed do-gooders from the DC and Marvel stables, but the pickings of the superhero genre is now more than ripe enough for a little variety at this point, too.

The latest adventure of capes and superpowers arrives from the current mecca of martial arts films that is Indonesia in the form of “Gundala”. Deriving from the homegrown comic book hero of the same name, “Gundala” probably isn’t going to mark the next major turning point in big screen superheroics, but it does offer plenty of incentive to cheer for its titular protagonist.

Abimana Aryasatya steps into the lead of Sancaka, who becomes the heroic crime fighter Gundala, with Tara Basro portraying Sedhah Esti Wulan, a neighbor with whom he kindles a romantic relationship. Bront Palarae and Ario Bayu play the villainous Pengkor and Ghazul, with Lukman Sardi playing the local politician Ridwan Bahri.

Fariz Fadjar also plays Awang, a child of the streets who mentored Sancaka in combat as a youth, with Muzakki Ramdhan playing the young Sancaka, and his father and mother being played by Rio Dewanto and Marissa Anita. Additionally, Cecep Arif Rahman also appears as Swara Batin, a ruthless assassin in the employ of Pengkor.

A young Gundala forced to fight

Growing up in an impoverished corner of Indonesia, Sancaka’s world is destroyed when his father is killed during a worker’s strike at his factory. Sancaka’s inner rage ignites and out blasts a bolt of lightning without explanation.

His mother Kurniati, desperate to replace his lost income, subsequently departs to find work in another city, only to never return. Sancaka is forced to survive on the streets of Jakarta, learning martial arts from his fellow street urchin Awang, and later leads an unassuming life as a security guard.

Sancaka’s altruism leads him to intervene in an attack on his neighbor Wulan, only for him to be tossed from the top of the apartment complex. His apparent death, however, is reversed by a bolt of lightning, resulting in Sancaka being revived, with superpowers.

Though overwhelmed by it all, Wulan, her brother Teddy, and Sancaka’s co-worker Pak Agung help him to develop control over his ability to generate lightning, and it isn’t long before he rises to become a hero to the denizens of the city being terrorized by the activities of the local crime bosses.

For those not already intimately familiar with the Gundala character, he certainly grabs attention whether on the screen or the Blu-ray box art. Clad in a winged red outfit resembling a cross between The Flash and Captain America while bringing Thor’s lightning powers to the table, Gundala more than carries the requisite comic book movie flair in what is sure to be his introduction to millions of people outside of Indonesia.

Abimana Aryasatya gives it his all as a young man haunted by parental abandonment. Now simply trying to get by, he makes a compelling protagonist for viewers to get behind, with the villainous component of the movie living or dying on how knowledgeable one already is about the movie’s source material.

A search of the film’s Wikipedia page reveals (spoiler warning) Ghazul as being effectively General Zod to Gundala’s Superman, while the movie itself holds that knowledge off until the very end. Since most of the movie is devoted to Gundala taking down thugs and gangsters, it comes off as quite a low-key superhero film, while simultaneously setting up a tease for a more fully vamped-up sequel akin to the Joker tease at the end of “Batman Begins”. 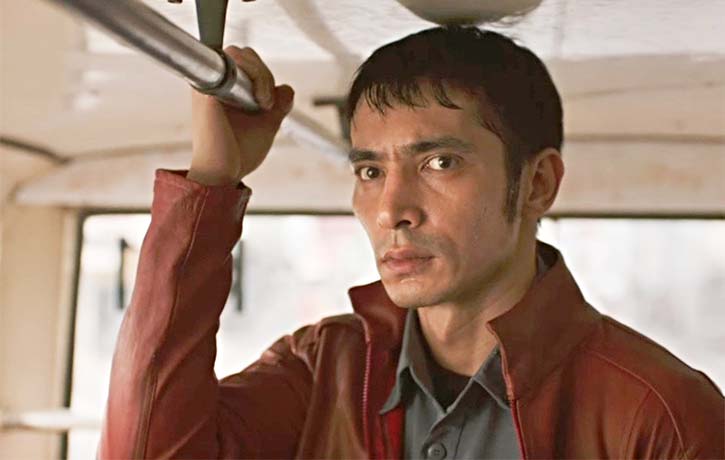 Sancaka is still gettng the hang of his new powers

To audiences not well versed in Gundala lore, the film may be felt bereft of being a properly super-powered comic book movie, but by the same token, the character himself not being a superhero A-lister outside of his homeland also makes it hard to hold this against the film. In that regard, “Gundala” might be better viewed as an urban vigilante actioner akin to the first few seasons of “Arrow”.

The first twenty minutes play like a spin on “Oliver Twist” with the young Sancaka picking pockets and being mentored in martial arts by Awang. The action scenes aren’t a full blown “The Raid’ with capes’ level of intensity, but they deliver what viewers want out of a popcorn movie.

Sancaka learned how to fight growing up on the Jakarta streets

Cecep Arif Rahman has the all-too-brief role as Pengkor’s assassin Swara Batin, by far the best enemy Gundala faces, and while his action scenes are splendid, he’s unfortunately underutilized. With the comparatively small scale of the film, the finale in particular feels like it may have taken its cue from “Daredevil” in its street-level crime-fighting heroics with a dash of superpowers, while the clear sequel set-up in the closing minutes may leave some viewers feeling like they’ve seen a part one in the truest sense.

Nevertheless, with its amiable underdog hero, following him on his next adventure wouldn’t be an undesirable proposition.

Whilst “Gundala” doesn’t mark the next leap forward in the ongoing superhero movie renaissance, it’s still a fun ride of silat and lightning bolts for those meeting the title character for the first time.

Audiences already well-versed in the origins of its hero will geek out at the movie’s numerous Easter Eggs on cue, while viewers from either end of the spectrum will find it hard not to root for Abimana Aryasatya’s performance as a man dealt a bad hand in childhood and a royal flush in adulthood. With superhero movies reigning more supreme than ever over cinema screens, “Gundala” makes the case that there’s still room for more.

Gundala cleans up the streets

“Gundala” is now available to stream and order on Blu-ray via Amazon!

Intrigued to see a superhero movie out of the Indo Cinematic Universe? What are your initial impressions of “Gundala”? What are your favourite Indonesian action films and fight scenes? Let us know in the comments below; Like, share and join in the conversation on Facebook and follow us on Twitter & Instagram!

Keep your martial superhero vibes alive in the FUniverse, with these Top 5’s, Top 10’s, exclusive interviews, do your potential talent justice by training in KFK gear, and subscribe for more All-Style superheroic fight action on YouTube!